The Great War at Sea via Jutland....Part 2 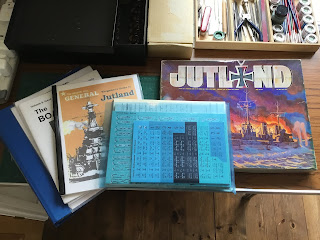 The Jutland collection - the box contains all the ship counters and other game aids. The counters you see in the centre are in fact duplicate ships as well as the plot counters for the Mediterranean. In the original game one used a copy of the map and plotted moves using a pen.

After an embarrassingly lot time I have finally gotten around to punching out all the additional ship counters I have for the Avalon Hill board game of Jutland. The additional ships not only expand the British and German fleets but also include the French, Italian, Austrian, Turkish, Russian (Baltic and Black Sea) and American navies. There are damage charts for all of the extra ships as well as some rather useful scenario specific charts. Amongst the numerous expansions there are a whole range of scenarios and optional rules and for the Mediterranean theatre there is a really useful plot map.

I am really pleased to have gotten this done as it has been lurking around in the man cave for some time. With my recent acquisition of the Great War at Sea atlas I am now set very nicely for some WW1 naval action that, at this stage, not cost me anything in terms of models etc.

The observant amongst you may well notice the black box in the top left hand corner. If you look closely you may just about make out what is coming next from the Del Prado collection.