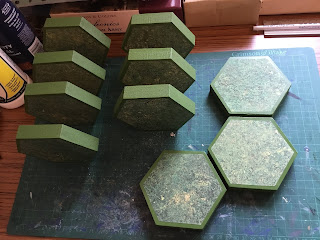 The first ten hexes of my green hill selection

There they are. Finished and ready to use. Below is a rather staged shot just so as you get the idea of what they look like. 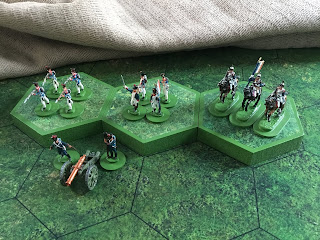 A sort of action shot - some Del Prado French holding a ridge (for a change) and supporting some artillery. Unit sizes as per Battle Cry - 4 infantry, 3 cavalry and a gun with 2 crew. 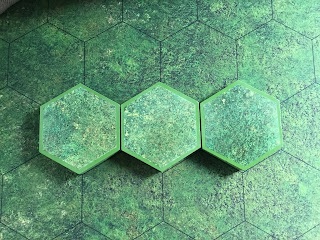 A ‘top down’ shot. Initially the labels were a little on the light side but with some varnishing and sealing they soon darkened up a little.

I shall be making a further five to go with these and will then be turning my attention to some other terrain items I am messing around with. I really wanted to get some 2 or 3mm thick MDF hexes sized at 100mm across the flats but given the current situation would not be able to order any for a while, hence the cut out card versions depicted yesterday.

Aside from getting a Napoleonic game in in the near future I also have the small matter of organising my 1:2400th ACW naval collection. This is all painted and ready to use but i need to add the ensigns and names. I am also planning to get a game in with t here as well as something a little different.

Do a shot from above when you get the chance please David :) Excellent idea.

I have added a couple of pictures to the post which will give you a better idea of what they look like in some kind of gaming context as well as a top down shot.