Tradition and the Del Prado Collection 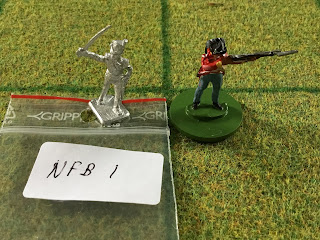 A Tradition British Napoleonic infantry officer alongside a Del Prado infantryman. You can see that from a build perspective they are very similar.

I have a degree of personal history in respect of Tradition 25mm Napoleonic figures. Way back in the early 1970s myself and two gaming friends from back on the Isle of Sheppey had a day out in London courtesy of one of my friends elder brother. Neil, the friend in question, had an elder brother who was, as I recall, an architect that drove to his office from the island to Holborn on a daily basis. Neil’s brother was large scale figure painter par excellence, specialising in the British Army, and so he knew of the Tradition shop (at that time at 188 Piccadilly) and indeed, often shopped there for his models. As it was the school summer holiday he agreed to take us into London and then to bring us back when he finished work. The date was arranged and so the three of us immediately began to make plans for what we would be doing with the day.

At the time I had a paper round and I remember saving up for around three weeks before we went so my spending money was, for me at least, a very healthy £5! We all took packed lunches and the only issue was that we had to be at Neil’s brother’s house for around 6 in the morning!

The day came and we were duly dropped off in High Holborn to spend the day in the West End of London.

At the time our armies were largely Airfix based and metal figures were new and exotic and also used by ‘proper’ wargamers. I was thinking about starting a Napoleonic Russian army and so when we arrived at the shop they would be my first port of call. I remember buying a unit of 20 Russian grenadiers in their distinctive ‘Kiwer’ shako and 10 gunners - enough for two crews. By the time I had tacked on some tins of paint (Humbrol Rifle Green as I recall) my budget for the day were virtually blown but it was worth it. We also visited Under Two Flags at St. Christopher’s Place just off Oxford Street which was another splendid shop for the model soldier enthusiast.

It was a grand day out but sadly the Russians are no more - I sold them to Eric when I moved to London along with some Hinchliffe Cuirassiers (HUGE figures), some Moscow Militia, greatcoat wearing infantry and some Hussars - the latter painted by Chris Hardman. I know Bill has a load of Eric’s Napoleonic figures to sort out so it would funny if these figures saw the light of day again.

Tradition figures from their 25mm range are elegant sculpts and are stylistically a really good match for the Del Prado collection as you can see from the picture above. The British contingent (and I am referring to the line troops) has two standards - the regimental colours and the Union flag - and a drummer (not in reversed colours though) but no foot officers per se. I plan to use the Tradition range to address this shortfall and as luck would have it the figures do not look too out of place alongside the Guards and Highlanders.

The three British infantry officer figures that came with the collection are pictured below. 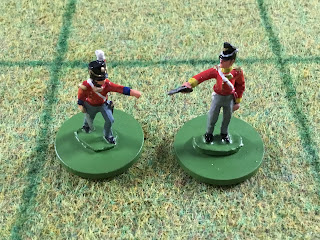 I have two of the figure on the right and one of the left but have absolutely no idea where they are from!
Looking at the British contingent as a whole my requirements in respect of command figures looks something like this:

* I am unsure what the colours were for the KGL either in respect of what they looked like or how many each battalion used.

There are some other foot command figures I need to get for the Allied army - mainly for the Brunswickers - but others will be contained within the additional units I shall be raising in due course.
Posted by David Crook at 17:19

The Tradition shop in Piccadilly was one of my regular haunts when I used to tour London using a Red Rover bus ticket. Great place full of exotic toys for a youngster. It's where I bought my copy of Charge for 55 shillings.

A few year further on from my visit I moved to London and was working in Berkeley Square - just around the corner from Shepherds Market which is where Tradition moved to. I remember buying a copy of the BattleLine version of Flat Top there as they used to carry a very small range of boardgames and books.

I spent many a happy lunch time there!

Tradition at Shepherds Market (gone) and the Guards Museum Toy Soldier Shop (still there) were my two 'Tube dash' places after meetings in London in the early 2000s. Time enough to rummage through the random 54mm discounted figures box at Tradition and magazines, then dash over to look at the odd vintage and boxed Britain's displays (many figures individually priced) and desk figures at the Guards Museum shop with their patient friendly staff, even if you only bought the one figure that day. Made up for the long journey out of the West Country with the odd toy soldier magazine to read on the way home. Happy days!

I hope you and yours are well.

I used to love popping in to Tradition although it was rather cramped in Sheppard’s Market! Very inspiring.

So glad to have found this blog as I am embarking on a very similar project right now: True-25mm scale Napoleonic armies (all five major nations eventually, but Waterloo initially), based around Del Prado, Prince August, Tradition, and Minifigs.

Your blog was very helpful in zero-ing in on the exact lines that will make a great presentation and will look consistent together!

Happy to help! My plan is quite similar to yours in that I will eventually cover the big 5. I want to cover the 1812 to 1815 period and for my own purposes am quite close to seeing the end set up for the French and Allied armies - the Prussians need rather more work, mainly due to the lack of figures in the Del Prado range. Tradition would be good and I am planning on hoovering some up at some point. I have some Minifigs French Chasseurs a Cheval and some Dragoons I need to work on.

I came very much after the fact with the Del Prado collection but I have really enjoyed working on what I have and adding to the collection from various sources.

All the best and I look forward to seeing how your project develops,