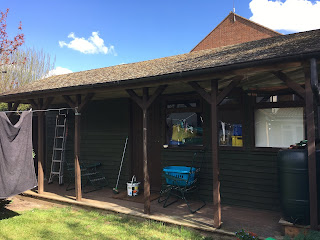 The shed. Although it is the full width of the garden it is only 6ft deep and has a rather quirky internal layout.

It has been a busy day and work on the DIY list (of which SWMBO is the custodian) continues apace. Today I have spent a large portion of the day repainting the shed in a wonderful colour described as Forest Green. As you can see from the picture the two ends of the shed are rather cramped in that the fences are rather close. It took some advanced gymnastics to be able to not only move about in such a confined space but to manoeuvre a step ladder (essential to reach the apex at either end) and balance a paint tray - let alone actually brushing the stain on the wood! 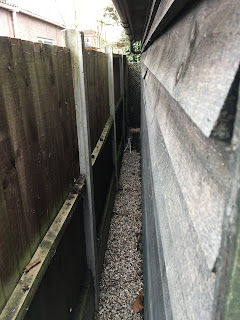 Yes, it is as narrow as it looks....My svelte physique will certainly be hard pressed to negotiate this but I should be able to manage....I hope.....

After having tackled both ends I called it a day - the front will be tomorrow - and so what better way to unwind after such a concerted effort than to tackle some figure painting? You guessed it - Del Prado figure bases and guess what again? Humbrol Satin Mid Green 131. 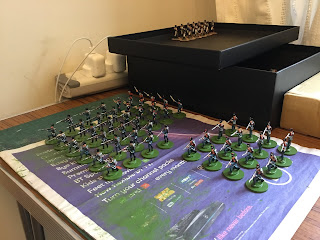 French Light Infantry. The chaps on the right are destined for a repaint into line infantry. The standing firing types will be Grenadiers whilst the kneeling figures will be Voltiguers. I have not followed my planned sequence with the French infantry at all as these chaps were the first I came to!

My son - who is currently decorating his room - duly observed that after spending best part of a day painting something on a 1 to 1 scale basis in one shade of green that I was then painting figure bases in another shade of green.

Only in the wargamer’s world eh?

You can now see why I left an 18 inch gap all round my wargaming hut.

Ah that’s tricky to paint David. Looks a nice set-up with that verandah. Nice and wide too. Dare I ask if you could use it as a Shedquarters?

An inviting looking shed nevertheless. That particular shade of Humbrol is one of their best greens in my view. Perfect for figure bases in any case.

My thoughts echoed your sons!

I hope all is well in your neck of the woods!

Unfortunately the shed came with the house so we had no leeway to play with around the edges.

Only worry about the forest green when you start painting the brown "Mickey Mouse" camouflage shaped sections on your shed to complete the camouflage scheme.

When we first moved into the house (15 years ago) I had plans to use this as a ‘shedquarters’ but the internal layout, not to mention the amount of stuff we have to keep in there, meant that it was not going to work. In any event the man cave is far better suited for what I need.

I am rather taken with this shade of green as it seems to have a little more depth to it than the traditional Matt 80. I am really liking the whole plain base vibe though - very old school!

I did contemplate going full on 1944 German ambush scheme but sadly SWMBO took a dim view....