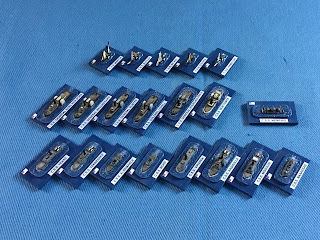 The Confederate Navy. There is a selection of ironclads in the bottom row with some cottonclads in the middle together with the floating battery C.S.S. Memphis. A paddle gunboat and some harbour tugs form the top row. The names are a mix of historical and hysterical - there are no prizes for guessing which are which!

Last year I started making plans for the ACW using the Spencer Smith collection and also tackling the all important naval dimension, specifically operations along the ‘Great Father of Waters’ - the Mississippi and its tributaries.

I wanted something compact and quick and easy to put together and for a variety of reasons I decided that using the modest range available in 1:2400th from Tumbling Dice would tick most of the boxes for me. Originally I was looking to scratch build a limited number of generic models using the ‘cartoon’ style approach but again, for a variety of equally tedious reasons, I abandoned the idea.

I acquired a number of packs of models from their Victorian range and then set them to one side whilst I focussed on the Del Prado collection.

Whilst this was going on I made the decision to scale down the planned Arab Revolt/Madasahatta style WW1 campaign - the naval side was becoming rather unwieldy - and so I opted to dispose of a whole pile of ships.

To cut a long story short, my ACW collection was painted for me as part of the aforementioned disposal by the legend that is Jim Jackaman. 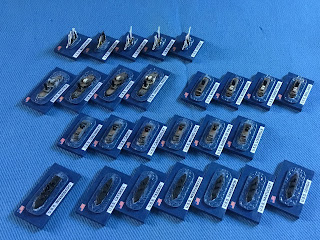 The Union Navy. There are a magnificent seven monitors in the bottom row with a selection of six of ‘Pook’s Turtles’ in the next, complete with the correct coloured funnel bands. Some sternwheelers (or at least very serious....) and a pack of assorted gunboats form the remainder of the third row. Assorted smaller gunboats including a pair well used to defending the homeland

I have not revealed these models up until now (I had them way back in January) as I needed to add the names and ensigns. This has now been tackled and so for your delectation here follows a selection  of pictures of ACW naval vessels primarily for use on the rivers or in estuaries. 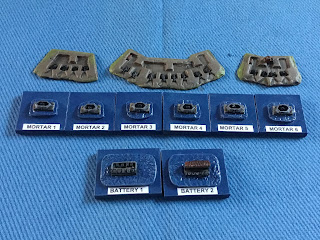 Additional bits and pieces. Floating batteries, mortar rafts and some small and a large fort complete the collection.

Jim did a fantastic job on these models and it is a great shame that the range does not include more models. A word with Mr Sulley at Tumbling Dice may well be in order....

My first port of call in respect of rules will be Bob Cordery’s Gridded Naval Rules or rather the variant that Mr Fox spent some time on which are rather good. Having said that there are a few other bits and pieces I would like add in.

The main reason for using 1:2400th is so that I can make use of the large quantity of Heroscape terrain I own. This will be invaluable for shaping the twists and turns of a meandering river. I have some shore batteries as well as the floating variety so some combined arms style actions will certainly feature.

Jim did a really lovely job on these and in fact there are a few minor conversions as he added some spare fortress guns to some of the cottonclad types for variety. All I had to do was to add the names and the flags which I have finally gotten around to. Now for some games methinks!

Once again many thanks to Jim for his work with this and I am only sorry I did not give it the credit it deserved sooner!

I really like them and they will be in action over the next few days. I want to try them out on my Heroscape terrain so watch this space!

All the best and many thanks once again!

They look lovely and have reminded me that I had planned to use Bob's rules for similar actions, but as with things, they have been overtaken by other projects and recent events.

I am looking forward to giving these a run out as naval games usually require far less setting up. I have a small scenario in mind that I hope to run over the next few days if possible.

Bob’s rules for the period are very playable and will stand pretty much any amount of tinkering - my friend Mr Fox did exactly that - but being me I want to add a couple of other bits and pieces. Nothing major, just a couple of modest refinements in respect of weaponry.

They do look lovely though and it is a shame that the range is as limited as it is although 1:2400th ACW ships are also available from Panzerschiffe in the USA.