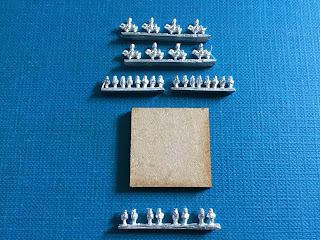 Tumbling Dice 1:600th scale cavalry and infantry. The former is available in helmet or shako whilst the latter are in close or loose order. The MDF base is a 1” square for comparison. Interestingly the figures themselves measure 5mm from the sole of the foot to the top of the head

I will be completely honest in that my enthusiasm for matters Napoleonic is struggling to reach the peak of the past three months. It was an insane amount of work to get them game ready and I really feel like I need a change to sharpen my interest once again. I am also conscious of the fact that at present I have more spare time than I would have ordinarily and that I need to make the most of it. There is no shortage of things that I can do but it is more a case case of what I want to do.

Finishing off the ACW ships was a welcome change of pace and will give me something else to game - I am planning to do so shortly - but I am now on the hunt for something else. I have several things I can take a look at but the curve ball of the Portable Colonial Wargame has given me much food for thought - and in a very positive way! 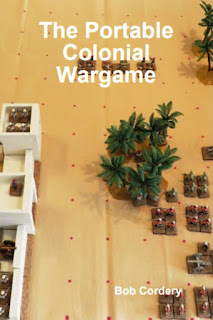 Inspirational for sure, but in my case probably not quite in the way you would expect - or possibly you might!

I have a whole pile of the chaps you see above - I actually prefer them to blocks of troops - acquired over time for various ideas but thus far with none being translated into anything tangible. Supporting them are some of the Tumbling Dice tanks (I have T34s, Shermans and Pzkpfw 4s), some ‘modern’ artillery pieces as well as wagons, limbers and infantry support weapons. One of my ideas was to paint them up as fairly generic types that could be used as a variety of armies depending on what I wanted to fight. A good example of this would the grey painted types being used for WW1 and 2 Germans and anything in khaki being used, well, for anyone that wore khaki. Essentially they would be a step up from my block armies. I also have some pieces from Oddzial Ozmy who specialises on 3mm figures and equipment as well as some from Peter Pig from their ‘Hammerin’ Iron’ ACW naval range.

Every so often I get them out of their box, carefully examine the contents, nod sagaciously at the appropriate moment - and put them back again....

What I am about to describe is quite common for me and i am willing to bet that at least a few of the readers of this blog have suffered in the same way. I was glancing at the cover of Bob’s latest book and thinking about the figures he used and how they looked. They are 15mm Essex figures as I recall but the thing that struck me was how, at distance they looked rather blob like - confirmation if you like of the old ‘table viewing distance’ painting standard (these are very nicely painted by the way and so I am just referring to the effect of viewing them at a distance - only the main colours show up in any detail). Was it by chance that my box of 1:600th models was located next to the book and has the benefit of a clear plastic lid (it is one of those flat Ferraro Roche chocolate boxes) meaning that I could see them? Coincidence? Perhaps but I prefer synchronicity.

Colonial in 1:600th? Are you mad? Well, after having spent more time than I should thinking about it there is absolutely no reason why not, especially when you see what else I have been toying with. 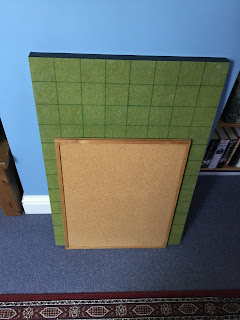 Leaning up against my green 3” 12 x 8 gridded playing surface is the old cork noticeboard from the kitchen which has a playing surface measuring 24” by 18” or, as planned, 12 x 9

For me the essence of the whole Portable Wargame genre is the ability to be able to fight wargames on a small playing surface. With this in mind I plan to explore using more smaller figures to represent units for the mass effect so, for example, a single strength point could be represented by 8 infantry figures. 1:300th or 1:600th in my case are both good examples of this. Using the armies in Bob’s cover shot as an example all that would need to be painted for an Egyptian infantryman would be a white undercoat and a red fez, perhaps with a blue tunic for an officer type. British would be red, white and blue (naturally!) with khaki an option. You are looking these at a range of at least a foot so anything else in the way of detail is irrelevant. Although there are no specific Colonial types available either from Tumbling Dice or Oddzial Ozmy the latter does produce a good ancients range so a paint conversion on something like a Celtic naked fanatic would double for Zulus or Fuzzy Wuzzies. The loose order Tumbling Dice infantry could serve as Bedouin or Afghan skirmishing types and in case you are wondering I am pretty sure that camels are available.

I have built up a small selection of 1:1200th scale buildings from Brigade Models and these include Middle Eastern, Mediterranean and Russian villages. These are lovely little models and although not the same scale as the figures really do not look out of place alongside them.

It is unusual for sure and is certainly not something I would have logically thought about but the more consideration I give it the more sense it seems to make. 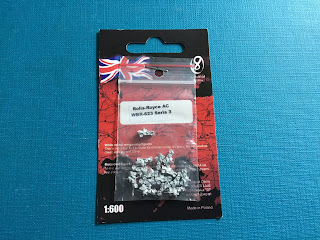 Mmmm indeed! For the record I can go from the sublime to the ridiculous faster than a McLaren F1 can do nought to sixty....

Worth a punt though methinks.

All the best and take care.

Frankly a very sensible option! I have whole heartedly embraced the World of ImagiNations of late, to allow me to use the figures I have and not worry too much about the details. Afterall life is too short, as we are very aware of given the current situation. In fact this post has spurred me on the dig out some of my figures to see what I can do...

Interesting to hear your plans.

Micro Scale... welcome to the Dark Side.

Interesting post and food for thought. Hope your keeping well!

For some reason I an reminded of a dude who used for his modern warfare armies, rivets to represent infantrymen. The rivet head made a fine helmet; the rest of the rivet 'suggested' the rest of the infantryman. Beggared if I know why you posting should trigger that memory. I recall being rather taken with the idea.

Somewhere in my inventory is a bunch of 1:300 WW2 tanks painted up in primary colours (red, blue, green...) to represent the major powers of a war game I was thinking of building, based on some pioneer work by several Auckland University students about 45 years ago. Another reminder your post has triggered.

I have a reasonable amount of this stuff and it seems a shame not to make use of it. On a smaller sized grid it will truly be a Portable Wargame!

The current situation we find ourselves in is a good opportunity to ferret around in the dusty recesses of our collections - who knows what treasures can be found?

We are all good thanks and the DIY list has taken a battering since I have been at home!

I have a number of 1:600th ideas to explore and the key thing for me is that they do not take up much in the way of time. I am looking forward to massed Zulu Impis though.

Over the years I have thought about and tried using multiple assorted items for armies - I even tried the famous ‘hair roller armies’ that Andy Callan posted in a magazine years ago.

From a cost perspective having these readily to hand is really helpful as I could get several armies together easily enough.

I have to balance the work involved though against a couple of other more pressing projects i.e. the Del Prado Collection.

There's probably more Rolls Royces in that blister pack than there was in reality.

Originally I only needed half a dozen or so but I am glad I have the pack as I will now need all of them.