A Grand Day Out

Friday just gone saw me making the 80 odd mile journey to visit Old Painter Bob at his home to conduct some wargame related business. It was the first time I had met him and I am only sorry I had not done so a whole lot sooner!

The drive to his house was straightforward enough (although I did miss his turning during the first pass!) and as pulled up he was waiting at his front door to greet me. Introductions followed and then the task of decanting a whole pile of assorted bits and pieces from Eric’s collection in my car was speedily concluded and the items heading in the other direction were duly set to one side. After a welcoming cup of tea (Mrs Old Painter Bob and the family hound providing tea and cake in the case of the former and a questing nose and ferociously wagging tail in the case of the latter) we got down to the serious business of the day - wargames armies.

I will leave details of Old Painter Bob’s part of the bargain to him but for my part it consisted of the acquisition of a humongous collection of Del Prado 25mm Relive Waterloo range of Napoleonics - primarily for the 1815 campaign although with some Russians from the Austerlitz equivalent. This lot comes in at a little over 600 pieces The pictures below do not do it justice as it was very much an ongoing project. My role will be to bring order to the chaos and to realise a 40 year old dream of fielding 25mm armies for the final campaign of the Napoleonic Wars. 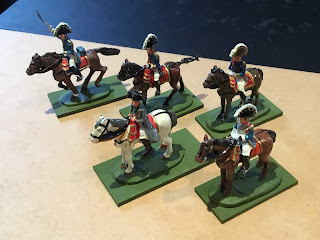 A selection of French commanders including Rod Steiger, sorry Napoleon.... 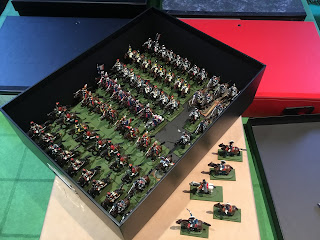 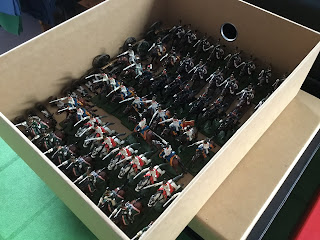 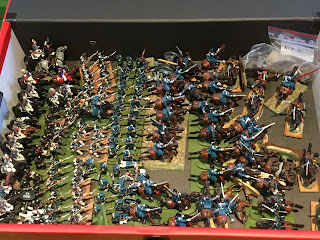 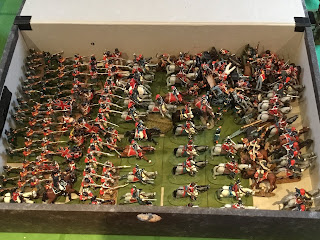 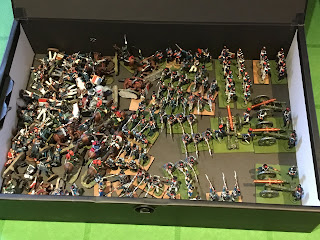 I should mention that the above are the figures in their respective boxes after a rather torturous drive home and before any major reorganisation has taken place.

I had the opportunity to discuss gaming in general and also to take a look at Old Painter Bob’s extensive collections and this was indeed a real treat. Everything from ancients to the Cold War in scales from 1:300th up to 54mm and stored in boxes and drawers everywhere - mostly in his operations room. I say mostly because if you looked closely enough you could see the odd tray of figures tucked away in odd corners of the house (ssh, don’t tell anyone!) I believe that the late Stuart Asquith mentioned about how he enjoyed seeing how other gamers did what they did and for me this was certainly true. There were highlights too numerous to mention - you see his blog for pictures of what he does and how he does it - but I was very impressed with his Napoleonic and Crimean collections as well as his Airfix based WW2 desert and ACW set up. It all seemed very organised but with a healthy dose of seemingly occasional chaos to keep things honest.

Old Painter Bob appears to be at that rewarding stage of his wargames career of knowing what is his gaming sweet spot and so it shines like a beacon through his entire collection. This only comes with experience and so we talked about games and rules gone by and how we got to where we are now. It was both stimulating and thought provoking to hear.

The remainder of my ACW Spencer Smith figures were handed over and he will be making a start on them shortly which means I can complete that particular project - particularly as another component of this arrived on Friday, more of which in the next post.

After a very enjoyable light lunch we repaired to the study where Old Painter Bob talked me through his library and mightily impressive this was. It is not the largest I have seen but it has a really good coverage and for sure there were more than a couple of titles I would like for my own collection.

The day was coming to a end all too quickly - the time flew by - when a few surprise items were added to my car boot full of Del Prado Napoleonic figures in the shape of the items below. 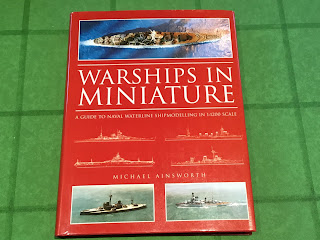 Full of useful tips and techniques for warship modelling 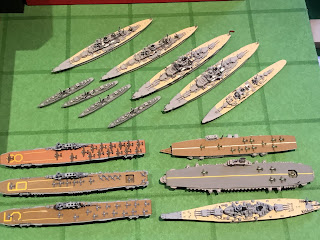 Surplus to Old Painter Bob’s requirements but these 1:1200th models are lovely to look at and I am now duty bound to do something with them! 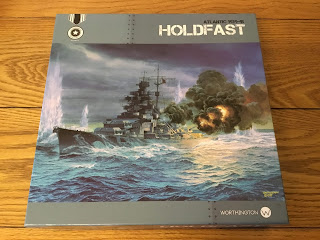 I was delighted to receive these items and I am sure that they will be extremely useful with my naval adventures.

We are fortunate in our hobby in that for the most part we are able to interact with kindred spirits in a friendly and generous way. Not only from the perspective of material items but also the generosity of time and of sharing knowledge and enthusiasm. As I drove home from Old Painter Bob’s house I was left feeling both humbled and honoured by the experience and delighted to have at last met this throughly decent fellow. I hope to repeat the experience at some point and maybe even get a game in.

I would like to extend my sincerest thanks to Old Painter Bob and his good lady as well as the family tail wagger for their hospitality, an excellent light lunch and the opportunity to spend some quality time talking about our hobby.

It was a grand day out.

Many thanks old chap. It was a dy to savour for sure!

Well what can one say, but 'Wow!'. What a collection of figures and certainly look forward to seeing what you do with them. I agree with the hitting a sweet point in our gaming lives as after many years of prevarication, I've settled on rules and periods that appeal to me, which has allowed me some focus for my gaming after far too many years of butterfly syndrome!

Quite a collection there! Sorting through a trove of recently acquired figures is one of the highlights of a wargamer's day. But that naval stuff on top of it all! How do you decide where to begin?

Wow is exactly what I thought and said when I saw it all - the photos do not really do it justice. It was good to not only meet Old Painter Bob but also to see how he does what he does and how he got there.

With this collection I believe that I have a really good platform to explore the Napoleonic Wars and more especially to be able to continue what I started way back in the early 1970s but with the benefit of experience.

It is a pleasure sorting through a collection that is mine rather than for someone else but I already know what will be first - and the real work starts on this sooner rather than later!

You’ll have a Napoleonic collection that is almost as large as mine!

Great post. I think we would all enjoy seeing someone else's collection and chatting with them about how they got there.

It was that indeed! Talking wargames and coming home with a car full of goodies is always a great day in my book!

Not quite as large as yours but certainly large enough for my needs! Now the organising can begin in earnest.

Our hobby is a very personal thing in which we occasionally work in tandem with other like minded enthusiasts. It is hugely rewarding to see how others do what they do and I was fortunate to be able to do so with Old Painter Bob’s collections. It has certainly given me a number of ideas to play around with.

A grand day out if ever I have heard of one. Just the sort of thing to put a spring in your wargaming step. I hope you enjoy the figures and look forward to seeing them in action on the table.

It has certainly put a spring into my step for sure! there will be a lot of work to do but I am 'up for it'. Old painter Bob is a congenial host and the day was superb although far too short!

Need to know what tat second Jap carrier is Dave (not the Shinano)
Lovely collection and good luck withe the 25/28mm Napoleonic madness .. wait a minute because I cannot say that I have an embarrassing box of that sort of (mostly unmade stuff) in the loft!

I am wondering if it is the Taino or something similar?

My knowledge of WW2 Japanese carriers is limited to 1942....