Action on the 'Great Father of the Waters' 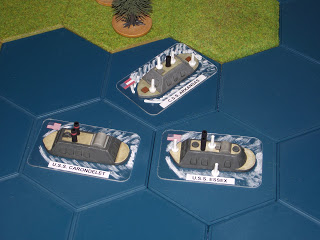 A furious action using my original scratch builds and Hexon terrain - hard to believe this was nearly 8 years ago! For a fuller report read the following: Raiders of the Lost Ark(ansas)

Part of my ACW project is of course the naval side. I had some rather grandiose plans about scratch building a range of ships to a larger footprint than my original versions from yesteryear but time, that most valuable of commodities, is in short supply for such an undertaking. With this in mind I have opted for a much easier solution and one that is currently well on the way to completion. There is around 30 odd ships and a good variety of types courtesy of the Tumbling Dice 1:2400th scale Victorian range. The collection is primarily river based and aside from ships includes some floating batteries and a couple of forts. If the current progress is anything to go by the collection should be making its appearance well before Easter.

I want to get a printed gaming mat but initially will make use of my Heroscape tiles as I have rather a substantial collection of these including around 150 blue water pieces. As most of the fighting this collection will be seeing will be either on a river or in delta terrain is something I will need to think about. I have a couple of ideas for this but it is worth mentioning that my plan will be to confine the action to a playing area of around 4ft by 3ft. Heroscape tiles are around 1 ¾” across the flat sides which is a little smaller than I would prefer as when I get a printed mat I will be opting for 2” hexes. Based on my table space this will give me a playing area of 26 x 18 hexes which for the type of naval actions I will be fighting is more than enough.

The rules aspect is a further consideration and one that I am looking forward to addressing. In keeping with the overall level of complexity demonstrated by the land rules I am using (something by Bob Cordery from the Portable Wargame stable)  those for the naval side will equally as simple in execution. At the time of writing I am looking at a fusion of the appropriate set from Bob Cordery’s Gridded Naval Wargames (as tweaked by the redoubtable Mr Fox) and those produced by Andy Callan years ago in one of the wargames magazines. My reasoning is simple. Bob’s rules are designed to be used on a grid which is my preferred gaming surface. Andy has a gunnery combat system that is more detailed and incorporates critical hits. I intend using Bob’s movement rules and combat system but will incorporate elements of the gunnery system from Mr Callan’s rules – particularly the size and lethality of the assorted weaponry in use. This will enable me to better model the number of gunnery dice rolled per ship (given the great variety of weapons used by either side this is essential) and will add a layer of personalisation to the proceedings. Call me old fashioned but describing a ship as having ‘sustained boiler damage meaning the speed is halved’ sounds rather better than having taken ‘x points of damage!’ It is an idea I am playing around with in any event and, needless to say, I will be writing about progress on the blog.

I really look forward to seeing how this develops. I am toying with the same sort of approach but not sure whether to go with Navwar 1/1200 or Tumbling dice 1/2400.

I do agree that a critical hits table adds something. I have just played a solo game of David Manley's Broadside and Ram and they have a critical hit approach. I wonder if his Dahlgren and Colombiad rules have one as I am thinking of getting those. I have got his campaign supplement for ACW naval and that has an interesting solo campaign based on Union ships hunring down a Confederate Ironclad. Regards Simon

I went and had a look - an exciting little action. The narratives I have read from 'Battles & Leaders' and Thomas Scharf's 'History of the Confederate States Navy' indicate that though the USS 'Carondelet' might not have been a match, USS 'Essex' certainly was - a formidable opponent indeed.

A line from Thomas Scharf during the course of 'Arkansas'' first day's action:
"The iron-clad 'Benton', the flagship of Rear-Admiral Davis, guarding the gorge through which led the way to Vicksburg, moved out of the way of the gallant 'Arkansas', and received for her courtesy, through her stern ports, from their very muzzles, the contents of the 'Arkansas'' starboard guns. ..."

I have found the account of the 'Arkansas' one of the most exciting passage of arms in the entire naval history of the Civil War. The lone vessel, taking on the entire US naval blockading force before Vicksburg. Real 'Boyzone' stuff, eh?

This all sounds very interesting and I look forward to seeing how your amalgamation of the rules turns out. As you say, it's always nicer to have boiler damage than 2 hits taken, as it adds to the flavour of the game:)

The Navwar models are fine - not as good as Rod Langtons but they are a lot cheaper - but opted for Tumbling Dice as they fit in with my playing area far better.

I will check with Mr Fox about his version of Bob's rules and will let you know. He is a generous chap so I cannot foresee any major difficulties.

I will be ordering a copy of Mr Manley's rules soon and the great thing about all of his work is that you know it is firmly grounded in respect of technical details.

Many thanks for the comment old chap - much appreciated and i am still struggling with the fact it was so long ago!

The whole Arkansas adventure makes for a great piece of history and as I recall I remember seeing a game about it on the net somewhere. I will have to take a look.

I will check out Battles and Leaders (I own a 'barely dipped into' set) but I have read the story as outlined in Thunder along the Mississippi by Jack Coombs.

Perhaps Mr Fox would be happy to upload his rules to the Portable Wargames GroupsIO site. I have already uploaded (with permission) a Lissa variant by the Tonbridge Wells wargames club and used at, I believe, Salute in 2019 as a demo game. I created a folder for naval rules at the site.

I will get in touch with him and will let you know. Like I say, I suspect he will be happy to do so.

I also need to register with the IO group as well - it is on my to do list!

The Ironclads and NWS GroupsIO are also worth looking at if you are not already on them.

I need to do some IO housekeeping at some point as there are a number of groups I need to sign up to.