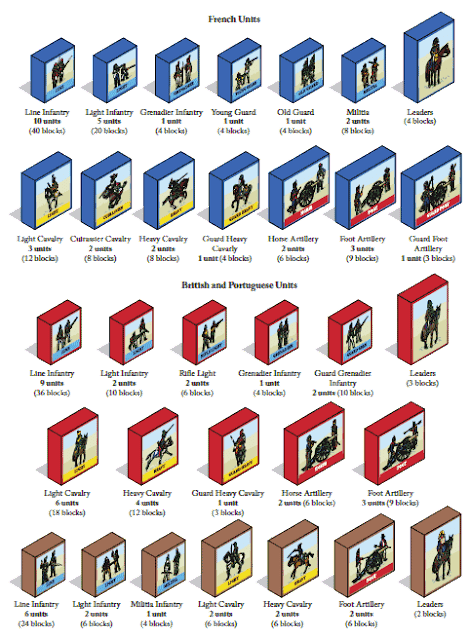 The unit mix from the Command and Colours: Napoleonic base game. Later expansions add to the selection available with the French gaining quite a few extra as well as additional troop types.

That pretty much sums up where I am at in respect of the 1815 collection with of course the main work being the organising and basing of the collection. After a couple of cursory experiments I have settled on using the same standard as for the ACW collection although initially I was a little concerned that the figures would look a little lost on the bases - 25mm circular for foot figures and 25mm x 50mm for the mounted and pill shaped in their configuration. Guns will not be on bases. 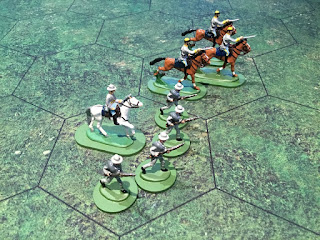 The first order of business will be to sort the figures into the units that Old Painter Bob had assigned them to. I can then look at what there is in respect of my own organisation.

The plan is that I will mirror closely the units mix in each of the Command and Colours: Napoleonic sets on the basis of one figure equalling one block. Ideally I want to extend that to reflect at a higher level the organisation of units from Charge! as I fully intend using the rules 'off the grid' and for a variety of other rule sets.

Taking the above picture as a rough guide one can see that, for example, there are 10 units of 4 blocks each for the French in respect of their line infantry. Under my system this would translate into 40 figures. Now I know for a fact that later expansions add to this so if I based my French line infantry on 48 figures - which is the rank and file component for a basic Charge! infantry regiment (not the advanced version) - I would be close to where I need to be. Extra figures like officers, musicians and standard bearers will feature but these will be generic as far as possible rather than for specific units.

My overall aim is to have a selection of Napoleonic armies that are representative rather than unit specific. As long as it looks right then it will be right.

It will not be possible to align the collection specifically to either the C and C set up or to that of Charge! - I will not be using as much artillery for one thing - but for the key components I will try to get as close as practical where I can.

After having sorted through the figures I will then be able to see what I can organise from stock so to speak and I will also have a better idea of what shortfalls there are and so can take steps to address these. Luckily I know a fellow Del Prado enthusiast that will be able to help!

There will be (hopefully) much horse trading taking place!
Posted by David Crook at 08:25

It will be very interesting to see where this goes! I like the notion that a unit might represent different scales. My own 24-figure foot and 12 figure horse units can stand for regiments or Divisions, depending upon which scale I want them to be.

They should look great when deployed on the table for battle and hope they can get to see some action soon.

You are brewing for something Dave I can tell!

The key thing for me was flexibility and so I have opted for individually based figures. As a typical ‘army’ would only feature some 50 to 70 figures and also that perhaps only half of that would be moving at any one time moving individual figures is not really a hassle. They also have a nice footprint within the 4” hex I will be using.

Initially I thought it would be ages before I could get these figures on the table but it may well be sooner. There is a lot of work to do but I am looking forward to tackling it.

I really want to get this one right as I am planning on this type of collection being the cornerstone of my gaming for sometime.