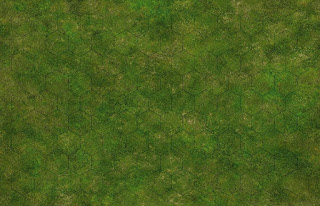 Unfortunately my gaming mat from Deep Cut Studios did not arrive before Christmas but it has now. I cannot fault the material – I went for the ‘mouse mat’ option - but there are a couple of issues with it. To begin with I ordered the colour option described as ‘meadow’. Deep Cut sent me a picture of what it would look like with the superimposed grid and I was pretty happy with the resultant ‘artist’s impression’. The mat duly arrived and the first thing that struck me was how dark it looked. I have yet to see the mat under natural daylight (this time of year I do not see my house in daylight!) but it looks quite oppressive and rather than being a meadow looks rather more like a shaded wooded copse or similar. I expect I would have gotten used to it but then another problem surfaced. The grid had been printed on the mat so that it was not square with the edges. This has the effect of cutting off by degrees a portion of each hex along the long edge of the mat. It is not much but it is noticeable. This was the risk when printing a grid to the edge of the material I suspect. In a nutshell it was slightly wonky, to use a highly detailed and technical term.

I contacted Deep Cut and explained the issue to them and I have to say their customer service is absolutely top drawer. Not only are they going to send me a replacement free of charge but they are also going to increase the mat size slightly (from 48” x 32.5” to 54” by 36”) meaning that the 13 x 9 hex grid will have a small border and they are also going to change the colour to grass green from the original meadow - which was a cheeky request I made, not expecting a positive response (it was changing the original order after all).

The faulty mat – which is perfectly serviceable, albeit slightly skewed – they asked me to destroy which seems a waste. With my natural cunning and inventiveness (who am I kidding?) I have already earmarked a use for it.

The replacement mat should be with me in a week or so which has, ironically, done me a little bit of a favour as I wanted to sneak in a cheeky game using it this weekend. Instead I will focus on the rather more pressing task of sorting out Eric’s painted 18th century stuff.

It's good that the supplier is going to replace your mat - credit to them. It seems odd that the cutting and the printing should be out of whack - presumably they specialise in this kind of thing. If they print a new one with a border, will the border run off as well?

These things always terrify me - I've thought of buying a proper mat for years, but I am nervous that I commit everything to matching the mat (re-basing? - not likely!) and something goes wrong. Too dark a tabletop is a hassle because it makes everything gloomy. One thing about my home-brewed painted hex table is that I can repaint it any time I want (I am jealous though!).

Good story - some life lessons in there, but a happy ending. Now we only need to cast a suitable big name actor to play your role in the movie and everything is ready...

Thinking about it it may not have helped the situation by my choosing an odd width - 32.5" rather than the 36" standard they have. The 'wonkyness' is progressively noticeable and more importantly - I know it is there and such things trouble me. The grid will be located nice and centrally in the new version and the border will not be an issue (Brexit notwithstanding that is).

Big name actor eh? That would be toss up between Daniel Craig, Benedict Cumberbatch or Fozzy Bear methinks....

DC - all life is a lesson although some learn faster than others....

I thought of Daniel Craig - Cumberbatch is an interesting shout - Fozzy Bear will be very tied up with his new role as British PM, I would think.

That's excellent customer service! I imagine the alignment of the mat to the printing machine was the issue. Fingers crossed the new one is the colour you hoped for and that the registration is OK.

I had forgotten about the role of the PM. In that case I will play it safe and opt for Brad Pitt but only because Tom Cruise would be too short...

I was rather taken with the service and the new colour will look far better methinks.

It is customer service that would shame some UK based companies for sure!