Risking it all on a Crusade 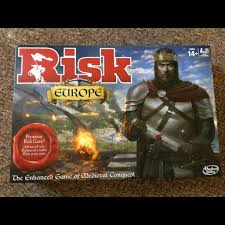 One of the better versions of Risk and should anyone need any of the components (other than the figures that is) then let me know! 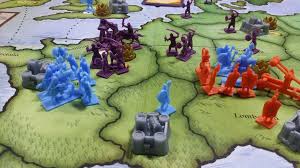 A game in progress with Saracens fighting Northern barbarians over France

The figures from each of the four sets

As a certain Lord of the Sith once said: “The circle is now complete…”or rather it is slightly more closed than previously! Some time ago I picked up at a very good price a couple of sets of the board game Risk – the highly acclaimed version set in the Middle Ages. As is common with this type of purchase I did not really buy it for the game itself, rather it was as a source of figures. There are four armies in this version of the game and each has a set of unique figures and also siege weapons. Each army has a cavalry figure, a close combat infantryman and one armed with a bow/crossbow. The siege equipment consists of a trebuchet, a ballista, a battering ram and a catapult. The figures themselves are moulded in hard polythene and are true 20mm and rather nice although in single poses. I would say – and I am certainly no expert on the period – that are designed to be 12th century types which is rather handy.

I have mentioned previously that I had acquired a copy of the latest release from the Command and Colours stable covering the start of the Medieval period. Working on the basis that one would need the base game to be able to use the inevitable expansions I am happy to sit on this until we get to the Arab Conquests or, better still, the Crusades. Suddenly the acquisition of these figures begins to make a modicum of sense.

The figures are very generic looking and cover what appears to be the following armies:

The number of figures within each force now stands at 48 cavalry, 140 close combat infantry and 48 missile troops. There is also around 8 of each of the siege weapons. These numbers are well in excess of what I envisage using but it does mean that there is plenty of choice available as well as the potential for conversions.

Now here is the thing. I managed to pick up another couple of sets of the figures for a very good price meaning that for each set I now have four games worth. I have a long term plan with these and when I say long term I doubt if I will get to this before next year but that is not a problem. I want to organise at least a pair of armies using these figures  - Frankish and Saracen being he obvious choice – for use with the Command and Colours: Medieval system as well as others. In fact it would not be beyond the realms of possibility to go full on imagi-nation and to also incorporate some fantasy elements. Like I said, this is very much a long term plan so there will not be any noticeable progress with it for some time. There are a couple of bits and pieces I would like to add to the figures I have but nothing major and I reckon the occasional rummage at a boot sale may well do the trick. I will also need to think about a few conversions for things like commanders etc. the key thing is that I really do not want to point a lot of money at this project, hence the acquisition of sets of Risk figures.

I have not painted this type of plastic figure for decades so it will be an interesting experience for sure but without the fumes and resulting headaches of yesteryear!

Congratulations! I never knew this existed. It will be interesting to see the finished article

It will be quite a way off but having the raw material is the first essential.

Nice looking figures David - definitely should be used in some capacity.

They absolutely should - and I hope to do so but I have no idea as to when!