First and foremost a very happy new year to one and all - let’s hope it is a peaceful, prosperous and healthy one for us all! 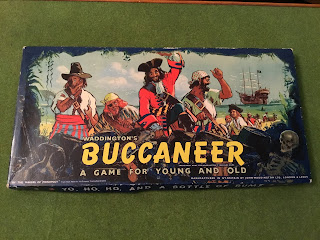 New Year’s Eve saw my beloved and I taking part in a two player five game marathon of the above game - how very rock and roll I hear you say - in which she emerged triumphant at 3 wins to 2. It was great fun and I am looking forward to getting more players involved at some point.

In my previous post I mentioned that I had my historical plans in place for 2020 with the focus being very much on the horse and musket period. The Napoleonic Wars will feature, as will the ACW and a smattering of the American Revolution with various Jacobite Rebellions as an occasional aside (at least once the Tricorne expansion is released). Of the three mentioned only the ACW will be exclusively figures based with the Napoleonic Wars featuring both figures and block/counters. The 18th century will be solely from board game perspective.

I would love to say that I will be spending all of my time in a monk-like state of study and meditation but am realistic enough to know that this will be impossible. With this in mind I have a couple of 'Plan Bs' in the shape of a few Sci Fi games - all of which would be good to go as is but with the option to expand them into the modelling sphere if required.

The first of this part of my collection is of course Red Alert - the Command and Colours board and miniatures games of fleet combat in space. I really like the functional look of the models with this and I own not only the base game but all of the expansions as well. the fleets are coloured in red and green and i promised myself that when I get to painting them this will become red and blue!

I also have a copy of Steve Jackson's classic game of cybertank warfare - OGRE. Again, this is good to go as is but I also have the models to go with it if required and indeed, I will be tackling them in due course.

The final Sci Fi game I own that can be pressed into emergency service is actually the latest addition to the collection and to be honest, it is a game that very nearly passed me by. 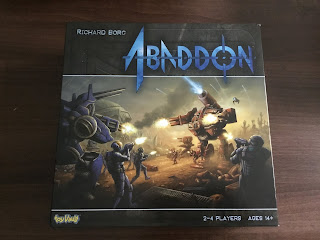 Abaddon is game of mech based combat by none other than Richard Borg of Command and Colours fame. The game is played on a square grid and rather than command cards one uses dice to issue commands. Combat is driven by cards and a random element is introduced by the use of ‘Wildfire’ cards - rather like critical hits although the effects can be both good and bad and can effect both players - which all adds the fun. There is a detailed review on boardgamegeek for those that want to know more but what I really wanted to show you was the Mechs (or ‘Links’ as they are referred to in the game) looked like. 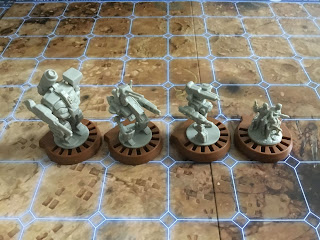 There are eight of each of the above in the game - if using them in a conventional Sci Fi wargame I would look to lose the bases and would also use other infantry. Note the square grid of the game board.

They are really rather nice and are made from the same material - a rubbery type of plastic - as the ships from Axis and Allies: War at Sea. The largest stands around 6cm tall and the only thing I don’t like is the base which is used to hold the crystal power units as well as showing the unit stats. I would  look to some kind of basing alternative should I get around to painting them.

All of the above are important parts of my collection due to there ‘pick up and play’ ability which could be expanded into painted models and full blown ‘proper’ wargames usage if required. At this stage the painting requirement is very much a secondary consideration but is something to consider as and when.

The main focus for the year ahead though is very much around the historical periods mentioned and quite unexpectedly (although perhaps not surprisingly) there is something else that has crept into view....

Buccaneer! How wonderful. I have a nasty feeling it's 45 years since I last played it.
Sounds like you have some great plans for 2020
Happy New Year

A happy new year to you! This is the version that I purchased for my beloved as she remembered liking the sparkly treasure items! This is the 6 player version so we can get the children involved at some point - it should be less argumentative than Monopoly!

I have built in a degree of flexibility into the project plan for next year which is absolutely essential for me so as to avoid distractions.

I hope it works!

Great to see the original Buccaneer game on show. This was the one that I was given as a youngster and I loved the whole concept, especially the treasure.Anyway best of luck with your year's plans David.

Buccaneer- now that's brought back some happy memories.
Have a sudden urge to play it now but unfortunately I don't even recall what happened to my copy - never mind. All the best for 2020

Happy New Year to you too and really hope to remain healthy this year!

It's nice to have a few games for those days when you just want to play something different. We tend to try and play a campaign in a lose sense or some historical actions, all with the same ruleset until we need a change. So if 19thC Bloody Big Battles, we might go WWII or 18thC, which refreshes us. Sometimes it's a skirmish game or two that breaks things up, leaving us ready for the next challenge.

Looking forward to seeing how yor plans pan out for 2020, whether historical or the Plan B games.

Happy new year and all that!

To be honest I want this year to be the year in which I extract the maximum amount of enjoyment from the things I already have rather than spending great wads of cash on the latest thing. My budget for the year will be pretty much accounted for when I pick up the Del Prado collection in any event aside from what call maintenance items - paints, glues etc.

There is sufficient diversity of gaming potential from skirmishes up to army level battles so I should not be bored, nor idle!

It will be a challenge for sure but it is one that I want to embrace.

I recall 'back in the day' (in this case the early 1970s) playing this to death alongside Waddingtons Campaign and to be honest both of these have influenced my gaming preferences to this day. It is better with more players though as the treasure is limited and the potential for conflict is far greater.

It is hard to find a copy with all the pieces and the later versions were limited to 4 players which is a shame in my opinion.

All the best for the new year,

That looks like a dangerously sensible and practical approach which is something quite unique to me! Seriously though, in many ways that is what I have finally wised up to but knowing me as I do having the plan B will be a welcome backdrop and will allow me to take a break from the mainstream of what I am doing.

In truth I was probably doing this anyway to a certain extent but am now making a far more conscious effort.

There are a couple of potential temptations due along the way so i will have see how well the resolve holds up in due course!

All the best to you and your plans for the new year which I shall be watching with great interest!

And to you old chap.

Drop me an email when you can.

Buccaneer 1960s 70s version with the tiny model ships, rigging and jewels. Loved this as a boy as a family game but not played it since the 1980s. Saw a recent Pirates of the Caribbean relaunch but just not as good in many many ways.
Happy New Year!