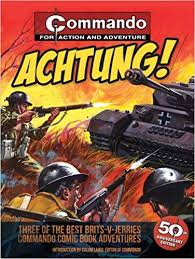 The series that launched a thousand wargamers (I suspect!) - an omnibus edition of three stories from the Commando Comic series.

I mentioned recently about my decision to offload my Memoir 44 collection. This was not a decision taken lightly but retaining it would have acted as a handbrake on what I want to get out of my gaming of WW2. It is not that Memoir 44 is in anyway a bad game, far from it, but for me it appears to be neither fish nor fowl in respect of the type of actions represented. It is a personal thing but my WW2 is firmly rooted at a one for one scale of operations and has been since the early 1970s. I have tried all of the current ‘big 3’ WW2 rule sets (again, this is purely my opinion) Rapid Fire, Bolt Action and Chain of Command but for one reason or another they never really ‘did it’ for me although Rapid Fire was a lot of fun.

Mention of the early days of my WW2 gaming cannot be made without reference to the inspiration that fired my imagination. Late 1960s war films, Commando comic books and Airfix figures and models were a heady cocktail (or was that the polystyrene glue or enamel paint fumes talking?) and provided me with a relative smorgasbord of gaming potential that was finally realised on a more formal footing by the book Battle: Practical Wargames by Charles Grant.

Fast forward to now and where I am currently sitting. My recent decision to revisit those periods that I originally started with but with the added advantage of years of experience also included WW2 and my attachment to this period manifests itself in many ways – land based games but also naval and aerial. I enjoy games from man to man skirmishes up to whole campaigns but there is a slight problem of perception. With the best will in the world a model tank (I am talking about 20mm here) on the table top looks exactly like a model tank i.e. one unit. Similarly, a fireteam of four nervous infantrymen crouched behind a hedge and desperately hoping that the opposition do not find them looks exactly like four figures crouched behind a lichen hedge on the table top desperately hoping that the opposition do not find them. The visual ‘look’ is that of a skirmish and whilst gamers will happily call 24 Napoleonic infantry figures deployed shoulder to shoulder a battalion I do not feel it translates as well for WW2. For sure I have played games where a base of figures represents anything from a platoon up to a regiment but these can feel as though the level of abstraction has been extended further than is comfortable – with Memoir ’44 being a good example. There is a disconnect between what we see and what is being represented and this disconnect varies to a lesser or greater degree depending on the type of combat being represented.

Ordinarily I have no such qualms adopting such an ‘extended abstraction approach’ when using a grid based system. “But Memoir ’44 is exactly that!” I hear you say. True enough – but it does not sit well with me. It feels very much like the levels of abstraction used have been extended to the point of making the action on the game board appear almost sterile and therefore devoid of flavour. To use that old saying it is ‘neither fish nor fowl’ – in trying to be a game that travels from battalion up to divisional level depending on the scenario it is very much a ‘jack of all trades and master of none’ – but make no mistake, it is fun to play.

One of the first things that Bob Cordery did when we were discussing Memoir ’44 a number of years ago was to add in as units such things as mortars, machine guns, anti-tank guns, engineers and similar other WW2 essentials. This was for his Memoir of Battle rule set that is still one of my favourites alongside the Portable Wargame. When I eventually get around to organising some WW2 forces and models these would be right up there as my ‘go to’ sets. The key thing here is that I want a WW2 tactical game that features the full panoply of WW2 hardware and where I have to make decisions about when to take a tank hull down or move an infantryman with a bazooka into the top floor of a ruined French cottage. Above all, I want this experience to be fun. Fun as in cliched WW2 Commando comic fused with Hollywood film fun.

In the meantime though I found myself slightly bereft of material for gaming anything WW2 related so, after some research, I opted to pick up a copy of the Devil Pig games highly acclaimed tactical WW2 board game called Heroes of Normandie. 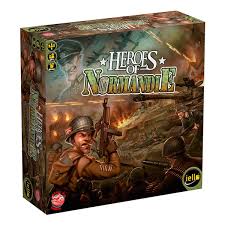 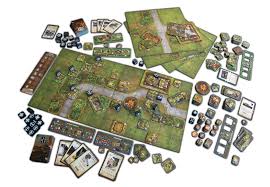 ....and the contents therein. Production values are very high indeed and the geomorphic mapboards are a delight. the base game includes US and German forces but there are a number of expansions including not only other formations for the core set but also the British and even French civilians and resistance (very handy for Vercours or similar and I am saying this only once....)

Ok then, let’s be completely honest about this – this is a game that owes its inspiration to Hollywood war films so will probably offend the purist but what the heck? It looks like a load of fun and if it serves to remind me of just why I got into WW2 in the first place then bring it on I say. Seriously though, it is game to enjoy at a low tactical level with no pretensions to be a detailed simulation of WW2 tactical combat. If I want that I would look to any of the far more serious games covering the topic  and in any event, at the higher operational level when one is using whole battalions or even brigades/division/corps then board games would be the way to go for me.

The plan would be to replace the game counters (which are very nice indeed) with models and there are not many of these to have to worry about. I would say roughly a platoon with some support and half a dozen or so assorted vehicles. At this level the resultant collection could very happily drop into use with the Portable Wargame. On the face of it, the Portable wargame would appear to be similar in concept to Memoir '44 in respect of scale but for me there is the the crucial difference of it being recognisably more, how shall I put it? WW2 wargamey.

There are a number of expansions to the base game which feature additional units for the US and Germans and introducing the British, French civilians and resistance and a whole raft of additional terrain and scenarios. There is also a Heroes of Stalingrad expansion as well as a Cthulu version!

The only decision I now need to make it whether or not to use 15mm or 20mm figures in support - in the interest of historical accuracy (meaning how I used to game WW2) my feeling is that the latter scale will emerge victorious. Who knows? I may even opt for plastic figures once again!

Ah, Commando comics, so many happy memories of reading these, which were superbly illustrated, although the stories these days would be distinctly un-PC. Alongside these sat Battle and Warlord magazines IIRC, the former being better.

As for your game, I think it has to be 20mm and unpainted Airfix figures, just for pure nostalgia!

Definitely not PC for sure! 20mm will be the preferred scale - mainly because it will give me a chance to do some kit bashing.

20mm unpainted plastic? Tempting but one has to bow to the inevitability of progress meaning painted metals will be the order of the day.

When I started my WW2, the rule set in use at the time was the Bruce Quarrie Airfix set. In may ways this was a quite playable set, but in my view somewhat flawed in the field of tank and anti-tank. 'A' class armour being impervious to a 'B' class gun, led to a kind of arms race to the point that all the battles tended to be March 1945.

Of the other 1:1 scale games, I found 'Panzer Marsch' very playable, with forces about a reinforced company level. The Club staged Panzer Marsch competitions over a couple of years about 15 years or so ago. My force comprised 3 panzergrenadier platoons, a 'support' platoon of mortars and MMGs, a 2-gun section of PaK40, and a platoon of 5 PzIVH tanks. It performed quite well, this battlegroup.

But there is a rule set that I would have liked to see develop to a fuller potential than I believe was ever realised. It was the Italieri 'Operation Overlord' set. Obviously it was a marketing ploy to sell figures and kits (I think the game package included 50 each German and American infantry, a Sherman and a PzIV). I played just the one game, a so-so rule set with one major attraction: for player interaction, I have never seen the like. You really had to be on your toes the whole game.

I have no idea why the game sank out of sight. Perhaps it was due to difficulties developing the game to disparate forces.

Speaking of player interaction, when played mano-e-mano, I find Bob Cordery's Portable Wargames score well in this regard. But nothing will beat the Italieri game for player involvement, for mine...

What 'converted' me to 'upscaled' games, was Command Decision. Several games of that, and I was seeing the elements for what they represented, platoon sized units, grouped into companies and battalions. It has got to the point that I have no special desire ever to go back to 1:1 scale games.
...Unless the Italieri game sees daylight again!