The dreaded lurgy has taken an even stronger grip and so my general level of malaise has dropped several notches lower. Funny thing is though that whilst any attempt at concentrating properly on reading material is doomed to failure, rummaging through figures is oddly therapeutic and to be honest is about all I am good for at the moment! 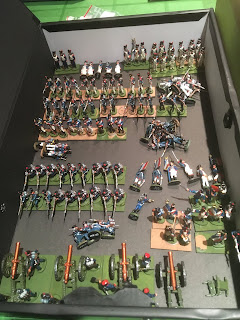 French infantry and artillery. The small piles are figures that have yet to be based but that have been placed with the appropriate units.

I have now gone through the last of the box files and as suspected the French army is not only the largest but is also the closest to being ‘match fit’. For sure there is a lot work in respect of rebasing but overall it is in pretty good shape and needs less adding to it. 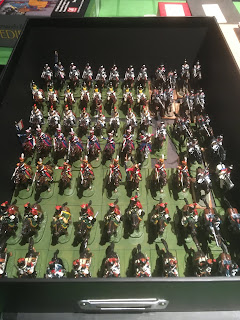 French cavalry including both Guard and line with the former represented by Horse Grenadiers, two types of Lancer - Dutch and Polish and Chasseurs a Cheval. Line has more Cuirassiers than is healthy but also adds some Dragoons and Carabiniers

There are a lot of MDF bases in evidence which will all require soaking off and the underside of the figure bases will then need some filing. The plan is to gloss varnish the figures and to paint and matt varnish the figures and MDF bases I will be using in the same green as for the ACW figures. As mentioned previously I have identified a few potential paint conversions which will add to the selection of units available. With the ‘unit’ sizes being small this will be an easily managed process and I am quite looking forward to it. 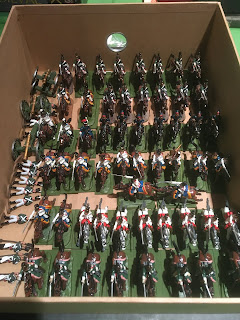 The one thing that has become more and more obvious as I waded through the box files of figures is that my planned organisation will be going pretty much by the board. For the most part the armies will be largely representational with regimental identities being limited to those troops that were unique – Scot’s Greys, 95th rifles, Old Guard etc. The default unit size will be based around Command and Colours so anything from 3 to 5 for infantry and cavalry and 2 or 3 for artillery. If there are sufficient figures of a single type to make up larger formations for use with other rules (I am thinking of Rebels and Patriots here with 12/16 figure infantry units and, I believe 6 figure mounted) it will be more by chance than design.

Now that the preliminary sort out has been completed I can see where the shortfalls are and so will be able to plan to address these. I can also get a feel for how large the respective contingents will be once the gaps have been filled. I will also need to get an order in to Warbases for the requisite bases as my current stock will not be enough.

Despite feeling particularly grim I am quite pleased with myself for getting this lot done. I am also pleased that the extra figures I will need to get are at a low level.

It IS kinda fun sorting out one's inventory to discover how one is to organise it all. I went through the same process a few years ago with my own Napoleonic figures with a view to recasting my whole organisation. Although I am quite happy with my own armies as they are now, I can't escape a certain wistfulness eyeing those nice shiny fellows in your photos.

I was very pleased at being able to sort these out as I am feeling particularly grotty at the moment! Originally I was planning to organise the collection around the Portable Napoleonic Wargame but I had the nagging feeling that basing them individually would be far more flexible. As I sorted through the collection I became more convinced than ever that this would better for me although the organisation became rather less formal as a result.

For sure there are some figures I will need to add but these are relatively few in number and crucially would not stop me from having armies that would be table ready once the basing has been attended to.

How horrible for you. I do hope you feel a tad better very soon. The work you have done on the collection will give you some encouragement and planning will hopefully be a little distracting.

In my experience I tend to have a week of purgatory (which is this one) and then a few weeks of irritation (which is to come) but the worst of it is that EVERYTHING is a real effort. Sorting out the boxes of figures was quite an achievement given how grim I felt but I am glad I have done it and you rightly point out, it has proven to be both a welcome distraction and curiously encouraging!