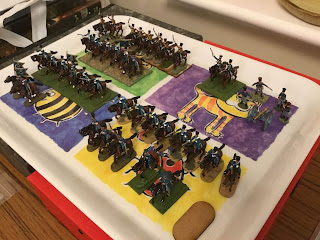 Prussian cavalry - Dragoons and Hussars with a gun and crew in attendance (and apologies for the tray!

I am feeling wretched. The horrible chesty cough/head cold/sore throat that afflicted our son and daughter over the Christmas holidays and that I thought I had swerved has taken hold. the timing could not have been worse as as sure as the sun comes up I will guarantee that my beloved will get it just in time for her birthday and our wedding anniversary next month. For now though, it will be industrial quantities of hot lemon and honey, loads of drugs, several layers of blankets/jumpers/duvets and binge watching Netflix.

My get up and go has got up and gone but last night I made a tentative start on sorting out the Del Prado collection and believe me, even that was an effort.

The picture you above is of the Prussian cavalry with a sole artillery piece and crew. There is also one of my pill shaped cavalry bases.

The cavalry featured shared a box with the accompanying infantry as well as the Belgian and Brunswick contingent. For the Prussians there are some three dozen or so Landwehr types and a couple of mounted commanders. It would be enough to make a start on a representative Prussian army but I will need to add to it to get it to where I want it to be.

There are a dozen Brunswick infantry and some three dozen or so Belgian infantry in blue tunics. It would be easy to paint convert a unit of Belgian light infantry chasseurs from these fellows which i will probably do. There is also a nice unit of Dutch-Belgian Carabiniers.

This early in the process of renovation I have already realised that there will be a number of units that will be represented solely on a Command and Colours basis which will mean the odd 4 infantry or cavalry figures. A good example is the British Lifeguards. This mounted unit is 8 figures strong whereas the C and C version is three blocks. I plan to paint convert half the unit into the Blues when I get to the British.

It is very early days yet but already I have a definite idea of the shape this project will take and hat I will need to achieve it.

Get well soon!
I like the pill shaped base; is it approximately 2 inch by 1 inch?

Well the timing could not have been worse, but hope you get better soon. Binge watching Netflix was a Godsend whilst recovering from surgery, along with reading a good book. Your plans are coming together, albeit more slowly than planned.

Many thanks old chap! The base is 1" by 2" and is 2mm thick MDF and came from Warbases. They look good alongside the circular bases of the infantry. Originally I was going to base the guns on a 2" square but with slightly rounded corners.

Many thanks old chap! Sorting out boxes of figures is about as good as it gets for the moment but I hope it soon passes.

Finally getting around to watching Breaking Bad and have just finished season 2!

Sorry to hear you are proper poorly - hope you get better soon. We need to read more about these soldiers!

Many thanks old chap! All I can do at the moment is rummage through boxes of figures and try to instil a semblance of order - luckily this is pretty much what I have been doing for the last 18 months so it is very much an automatic reflex....

It is and I hope so!