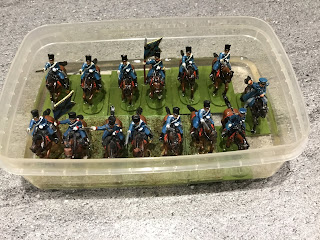 The first of the collection in soak to get the bases off. Prussian Dragoons and command. I have a further 14 or so of these fellows.

There is a light at the end of the tunnel in that whilst my chest feels like a punchbag after a sparring session with Rocky my head does not feel quite so cotton wool filled. It means I can concentrate rather more and whilst the cough is still giving me spots before my eyes and upper body aches and pains the like of which even the incredible Hulk would have groused at; I can start looking at things in a little more detail.

The armies I will be raising will be relatively modest in size but with sufficient variety of units and excess numbers to make life interesting. One thing I had not thought about was the size of games I would be undertaking. Way back in the days of the block armies and a 13 x o hexed grid I used to work on the basis that around a dozen units a side enabled a really good game to be fought. This would often translate into half a dozen or so infantry units, a couple of cavalry units and perhaps a gun or two. The standard size of playing area was usually 12 x 8 or 13 x 9. Around 15 for 16 units a side would be realistically about as large as one would like to go.

The armies I am working on would be probably be around one and half times the size mentioned  – remember this is based on a lot of playing experience using the grid sizes mentioned – which will give me plenty of variety of variety.

This is not an approach I had considered previously for this period as in many ways old habits die hard – 20 to 24 figure infantry units and a dozen or so cavalry seems almost obligatory for the period and it is a hard habit to get out of. Using the Command and Colours/Portable Wargame standard for units means that I can fully utilise small numbers of figures which is an important consideration with such a collection as that of the Del Prado range.

The famous Command and Colours/Portable Wargame standard of 4, 3 and 2 figures will be varied slightly as a number of mounted units are of 4 blocks and the artillery are of 3.

The first task to be undertaken will be to get the figures off their bases and so the first batch are now quietly soaking away. Conventional wisdom is to leave them for around twenty four hours to soften them up so lets see how that works out.

Assuming all goes well with the first batch I can then mobilise a couple more of the boxes I am using so that more figures can be soaked at a time.
Posted by David Crook at 17:42

Moving forward well in both execution and planning. I hope these diverting thoughts and actions are helping you through feeling unwell. I look forward to seeing them on the table in action.

I think I may have turned a bit of a corner in that I had a reasonable nights sleep and the fever seems to have abated slightly. I am not quite so achy either which is good news. The cough is still there and my throat is still on the sore side but overall I reckon that I may be over the worst of it.

The two units soaking were on different bases - one card and one MDF. The former came away really easily whilst a little more care is needed with the MDF version.

An overnight soak is fine though so this weekend I shall go into full on soaking mode!