"That Fate had been more discriminating" 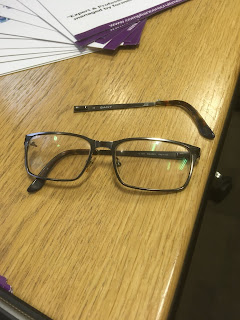 I know they were old and in need of renewal but I could have done without them prematurely giving up the ghost!

It has been a challenging week of niggles. Individually they are small beer for the most part but when several happen in quick succession even the most die-hard optimist would feel slightly aggrieved, borderline paranoid even. To begin with a couple of books I had ordered from a well-respected second hand dealer failed to arrive. Failed to arrive as in disappeared into the ether – they should have been with me three weeks ago. The dealer has refunded me in full but it is a hollow victory as not only have we both lost out on the books in question the dealer is also out of pocket.

My LinkedIn account for work was hacked. This has proven to be a royal pain in the head. Last Friday a spurious ‘business proposal’ was sent to a couple of hundred random people with a dubious link embedded in it. A veritable deluge of replies came in to me from people asking about the proposal, all of whom I had to advise that this was a spoof message. I even drafted a couple of posts on the subject in the hope that people would read it and understand what had taken place but to no avail. Naturally I reported this to LinkedIn themselves but all they appeared to do was to restrict my account for a couple of days (which in the world of recruitment is like having your right arm cut off!) as they had noticed ‘suspicious activity’ on my account – too bloody right there was!

I was at a work related conference yesterday morning and had just set up our trade stand when the right army of my glasses decided that it was going to part company with the rest of the frame. I would not have minded if it was just the screw falling out but no, the hinge itself had disintegrated. Worse still it was not something I could jury rig easily. I am short sighted and whilst painting and modelling or reading are no problem anything beyond two feet away is a murky  blur. Clearly this would mean driving would be problematic and as I am due to travel out tomorrow by car this was certainly in jeopardy. In my experience being able to see whilst negotiating the M25 during the rush hour is generally considered to be a good idea…. Luckily I discovered a spare pair at home  (the prescription before the last one if you please but still quite usable) so visibility has been restored, albeit not as efficiently as previously. I am due for an eye check next month in any event so these will have to do until then although I was fortunate enough to get a much sooner appointment. The sooner appointment meant a few short notice changes which is a pain to be sure but sadly unavoidable!

A parcel containing a special commission arrived during the only 20 minutes the house was unoccupied earlier in the week and so will have to be delivered again – luckily I was able to book it in for tomorrow otherwise it would have meant a trip to the local sorting office on Saturday morning – never a good idea as parking is problematic at best. 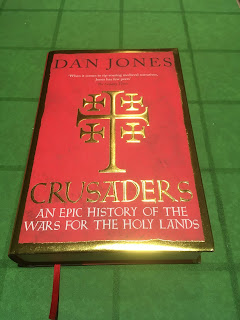 Despite all the above hassle there are some good things that have happened this week. To begin with my copy of Crusaders by Dan Jones arrived, courtesy of my Amazon Christmas gift card. Just the thing to inspire the Risk based Crusader armies in due course. I suspect I will be watching the Kingdom of Heaven (special edition) again before long. I rather like the author’s writing style and am always a fan of any writing that involves the extensive use of anecdotes from those that were there.

The replacement gaming mat arrived from Deep Cut and it is far better than the original version. I will get a picture of it for the weekend. Now that we have agreed the format I need I am looking to order a desert style mat and one featuring a seascape. An indulgence I know but I will also get three of their carrying cases to store and transport the mats in.

Tomorrow will see me collecting the Del Prado Napoleonic collection as well as delivering a substantial chunk of goodies from the collection of Eric Knowles which I am really looking forward to. My plans for the collection may well change very slightly – no details just yet as I need to check a few things first – but whatever shape they finally settle at I will have a first class collection that I will be sure to get a lot of enjoyment and pleasure from.

So you can see, it has been an eventful week in many ways, some good, some bad but I suppose all part of life’s rich pageant I suppose – and a bonus point if you can tell me where the portion of a quotation came from that I used for the title of this post!

I commiserate from afar! It sounds similar to several light bulbs burning out at once, or within a day or two of each other (usually how it happens). Usually late at night, or some other time when the nearby stores are closed. Of course, you go to the closet where replacements are kept only to find that you are OUT of replacements. Or working on something at the toy soldier desk, needing super glue or some similar adhesive, and discovering that the fairly new tub is dried out. My head is in my hands. Deep sigh.

Well I am glad that at least your replacement mat was a positive note among those irritations David. Certainly don't envy you the journeys on the M25, been stuck on that road too many times in the past!

Commiserations on your terrible week. I sometimes feel that "Life's rich Tapestry" is wearing a bit thin in places.

It all seemed to happen at the front half of the week but fortunately the back half is looking a whole lot better!

The northern part is a dreadful road for sure and I used to dread going to Reading when my daughter was at University.

Tomorrow will be a good day though for sure!

Dare I say it but it could be a well worn cliche!One has to roll with the punches or bend with the breeze I suppose.

What a vexing and frustrating week for you. I hope it gets better soon.

Wow, what a week! I'm long sighted and without my glasses, I couldn't do my work, hence I have two pairs, one at home, the other at work. I hate it when books go missing in the post, but fair play to the vendor for refunding your payment. At least things can only get better, he say and famous last words and all that...

All will be revealed in my post of tomorrow.

Things have improved for sure and my blog post of tomorrow will reveal just how!