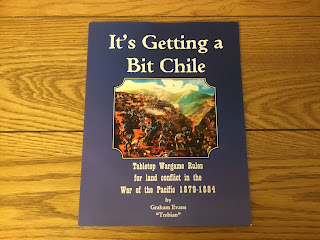 Worth it for the title alone! Table top rules for the War in the Pacific 1879 to 1884 written by Graham Evans (aka Trebian). For a far more detailed summary of the book you could do no better than read Bob Cordery’s blog.

Three blog posts in a single day? I will have to check the last time I managed to do that but I reckon it was a good while ago!

The final part of my Christmas Amazon gift card from the offspring was a copy of the newly released set of rules you see above.

As mentioned above there is little I can add to what Bob has written as a summary of the book so I will throw in a couple of observations and general thoughts.

I really like the approach that the author has taken with these rules and indeed the book itself in that even if the war was completely unknown to you (and I suspect that may well be the case with many gamers) this book will give you the basics you need to build upon. There is a potted history of the war and information about the combatants and the assorted weaponry in use. All this is nicely wrapped up in the rules the author has developed which also include game related ratings of the principle commanders as well as a couple of historical battles to think about.

There are some flags and a quick reference sheet that you are able to copy for your own use, a modest bibliography and a really useful uniform guide that features rather a lot of kepi wearing types....

The author, whom I had the pleasure of meeting at COW 2019, has done a magnificent job with this book and it is, by his own admission, very much a labour of love and it definitely shows. He has taken a little known war and wrapped his arms around it and produced a set of theatre specific rules with enough extras to ensure that the table top action will have that all important flavour. It is quite simply a superb piece of work.

Where my thoughts are heading

Now what possibly could be my interest in this war given my recent championing of the merits of downsizing? Well, how about this for a bonkers idea? I have a couple of dozen or so kepi wearing 30mm ACW Spencer Smith figures that could be pressed into service as the armies are generally very small and whilst the rules suggest bases of three infantry I reckon I could use a single figure per base.  A four base infantry unit also coincides with the standard size used with the Portable Wargame and three such units would work with either Rebels and Patriots or The Men Who Would be Kings.

The period would make for a colourful ‘side hustle’ for me as I really like the idea of using these rules with 30mm ‘old school’ figures. I reckon that I have sufficient figures to do this so will endeavour to research the period in more detail. It will be a way off but could be something rather different and of course there is also the naval dimension to consider (and naturally I am!).

Once again many thanks to Graham for this wonderful piece of work that I highly recommend!

I must admit that I love his titles too, as it's my sort of humour. I see no problem with single figure bases, it's the number of bases that count that is important as far as I can tell. With 4 bases to a unit, you can also use Neil Thomas' rules, which are great for quick games as you only have 8 units a side.

Thanks for your kind words. My fingers are really crossed for this set, as they are quite a passion.

Graham has set a high standard of production quality as well as setting an excellent example of how to write and present a set of rules for a specific war. I must admit that as I was reading them, I was wondering if I could do something similar for the Chaco War ... but I have one or two other projects that I need to finish first before I do!

Funnily enough I have been thinking along the lines of using my ACW figures as a test as I have the grid already for use. Graham has a great sense of humour and I remember being impressed with his impassioned speech over Sunday lunch at COW concerning battlefield preservation - a subject he is equally involved with.

His enthusiasm is infectious.

No problem old chap! Considering the quality of the publication and the effort and enthusiasm put into it it would be very remiss of me not to do something with it!

Many congratulations and I wish you every success with it!

He has certainly set the bat very highly and this book would be a good template for any aspiring rule writer. If you went on to produce a similar tome for the Chaco War I would be first in the queue to buy a copy!

I was thinking about trying the rules out using my ACW 30mm Spencer Smith figures on a ‘one figure, one base’ basis.

I reckon that could be fun to do!

My units were originally set up for NTs rules, before I realised you ended up with a game that looked nothing like the War of the Pacific.