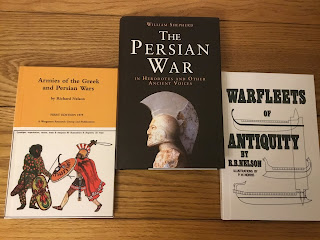 Some classic Greek history and all in hardback.

I mentioned previously about making use of my Christmas Amazon gift card and the picture above shows just some of the haul. The two WRG books were a little on the indulgent side as they are both hardback versions (I also have the Dark Ages and the Crusades title on a similar basis) and printed to order but with secondhand prices for the armies title coming out at more expensive that the version I purchased I do not feel quite do bad! Warfleets of Antiquity also has a copy of Richard Nelson’s hex based fleet action rules contained therein and of which a stripped down version were used in his book on Salamis.

The big hardback in the centre is a great fusion of ancient writing - mainly Herodotus - and modern interpretation and covers the entire period of the war from Marathon onwards.

The likelihood of me raising armies for this period is remote but the naval side is a different matter. If I went down that particular path then Tumbling Dice would once again feature and the rules of choice would be hex based.

The old WRG wargamer's guides are print on demand now? Are all of them available?

Hex based naval actions have an awful lot to recommend them, especially to someone such as myself who is only likely to dabble in them now and then.

So far the following are available but I know that Sue is working on the two volumes of the Middle Ages titles. Macedonian and Punic, Rome Dark Ages, Crusades and Feudal Europe are all available as well as the two pictured. You can get them in soft or hardback. Just check out Sue Laflin-Barker on the net and that will get you there.

Nope, definitely not. I am merely backfilling a hole in the collection....

David - what's the print quality like on the Armies book - the Amazon reviews are split 50:50 so a personal review would be good.. :o)

I will take a detailed look this evening and will let you know. One thing to bear in mind is that the size of the book is smaller than when originally released so whilst the format is the same there are more pages and the text etc is correspondingly extended.

I spoke to Sue Laflin-Barker at COW about this and she said that is why it has taken so long to get them published as she has had to reformat the whole series.

The production quality is good and from what I have seen of the others so far appears to be OK but I will have a closer look this evening.