Raiders of the Lost Ark(ansas)....Game Number 11

Preamble - I previously mentioned that it was my intention to fight two games this weekend and I actually managed to do so. The only thing is that the second game was a re-fight of the first and this came about as a result of a number of minor but significant features of the rules I was using. I mentioned in my last post that I had felt the need to re-visit MoBaS and so the weekend gaming activity was given over to the swampy bayous of the deep South, somewhere off the Mississippi in 1862.

The next phase of the Union advance along the mighty Mississippi was underway. A patrol consisting of the U.S.S. Carondelet and the U.S.S. Essex was pushing forward to see how the Confederate defences were organised and to interdict and enemy river traffic. What they did not expect was to encounter any enemy warships....

The C.S.S. Arkansas had spent a very trying couple of days moored and over cover whilst her engines were repaired for what seemed like the umpteenth time. Poor quality engineering, scant spare parts and woefully trained crew all contributed to making what should have been a routine repair job a major undertaking. Still, at long last the Arkansas had slipped her moorings and nosed her way cautiously back into the midstream and the resumption of her journey back to friendly territory. With the U.S.S. Carondelet leading, the two Union ships continued their patrol along the river, the dark and sinister banks slipping by and the only sound the regular thumping of the great wheel and sibilant slap of the water. 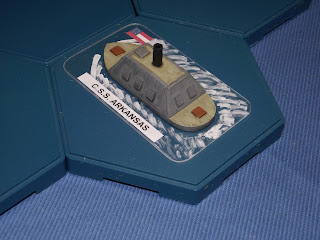 Meanwhile, the C.S.S. Arkansas, her tired engines labouring heavily, reluctantly built up to her best speed and with her crew tensely manning her artillery and lookouts eagerly scanning both the river ahead and the banks on either side. "Smoke ahead!" cried the lookout on the C.S.S. Arkansas and immediately the small ironclad became a bustle of febrile activity; gunners checking guns, engineers (such as they were) anxiously checking the myriad valves, gauges and other assorted parts of the complex machinery driving the ship forward. 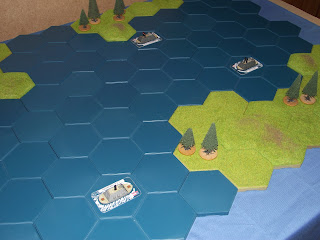 Almost simultaneously the lead ship of the Union line, U.S.S. Carondelet, spotted smoke on the horizon and so the same pattern of frenzied activity took place as on the enemy vessel as both her, and the U.S.S. Essex made ready to engage what could only be a Confederate ship. With practiced ease the two Union ships swung away from each other, the intention being to engage the enemy vessel on either flank; thereby causing her to have to split her fire. As they moved onto their new stations a strident crack rolled across the turgid brown water followed by a billowing cloud of smoke as the Confederate ironclad opened fire with her forward battery. U.S.S. Carondelet returned the complement but to no effect as the range was too long for effective fire. 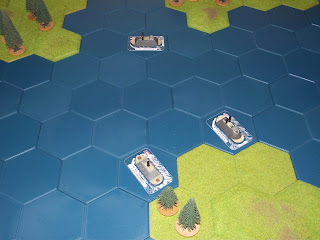 The U.S.S. Essex prepares to round the headland as the C.S.S. Arkansas looks to engage the U.S.S. Carondelet

Thus far the long range gunfire had been largely ineffective but as the opposing vessels closed this was about to change. Both sides avoided any further long range duels as this was now going to be a close in fight and so the crews made ready for the inevitable carnage. For the C.S.S. Arkansas this was to be sooner rather than later.

Both the U.S.S. Carondelet and the U.S.S. Essex opened fire and the great weight of shot and shell struck home and roundly battered the Rebel ironclad; starting the iron plates, shattering stays and hull fastenings and a succession of small leaks (in rule speak she suffered 2 hull hits from the 4 in total). 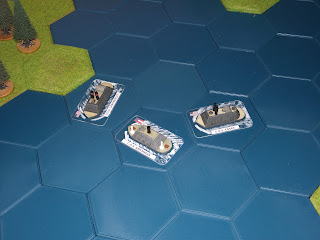 With her hull leaking alarmingly, the C.S.S. Arkansas attempts to return back up the river but her path is blocked by the looming bulk of the U.S.S. Carondelet.

Having just got the C.S.S. Arkansas mobile once again her commander was loath to risk her further and so this fight needed to be ended, and quickly. The Rebel ironclad swung her helm over to port and with gritted teeth, her commander prepared to disengage across the face of the entire Union squadron.

Despite her injuries the artillery of the C.S.S. Arkansas was still intact and she was about to prove just how effective it was. At point blank range she opened fire at the onrushing U.S.S. Essex and punished her severely and so her hull was riven and her gun deck turned into smoke-ridden, flaming, screaming, blood red  facsimile of hell (again, in rule speak she suffered 2 hull hits and a crew hit). Not to be upstaged by the efforts of her erstwhile opponent the U.S.S. Essex opened fired with the only guns that could bear but every shot struck home and so the C.S.S. Arkansas suffered even more damage to her already battered hull.

Meanwhile, the U.S.S. Carondelet added her own contribution to the discomfiture of the Rebel ironclad and managed to dismount an entire division of her artillery (in rule speak, an artillery hit). The situation of the C.S.S. Arkansas was critical and she was remaining afloat only by sheer stubbornness.

Conscious that her damage was mortal, the commander of the Rebel ironclad pointed the bows of his stricken vessel towards the shore whilst simultaneously attempting to maintain a bold front to her circling assailants. It was a gallant but futile gesture as both the Union vessels moved in for the coup de grace. As a final gesture the C.S.S. Arkansas opened fire on the U.S.S. Essex and the Union ship staggered under the hammer blows from the point blank Rebel barrage (in rule speak she suffered a further Artillery hit; a Crew hit and an Engine hit). Battered, bloodied but unbowed; her scuppers awash with blood and with vast clouds of steam belching from every seam; the crew of the U.S.S. Essex rose magnificently to the challenge and fired the fatal salvo at the Confederate vessel (rule speak for the final time, scored a hull hit which equaled the ships hull point total of 4, thereby sinking her) 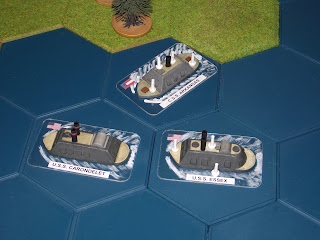 The only way is Essex - battered, bloodied but unbowed; U.S.S. Essex finishes off the C.S.S. Arkansas whilst the U.S.S. Carondelet prepares to pick up survivors.

Early days but the rules thus far appear to work in a very MoB like way - I will need to tweak a few areas (that I will detail in a later post, once I have cleared my thoughts on the subject) but nothing major so I guess that is a big plus. Of course it will mean I will now have to finish the fabled 32 othe models in order to keep the ironclads company!

Really cool on how you are working on your own rules, but also really liking the terrain/gameboard that you have.. the hex style board really works nicely with how you are developing things. And can really give some different configurations easily enough.. I guess?

Many thanks old chap for the comments - much appreciated! Hexon does give a very nice finish and to be honest my own collection is currently quite modest. I want to add to it to cover my new 6 by 4 ft table and would also like to get the desert version.

It looks really nice with the block armies and also my ACW ship scratch builds so it was certainly a good investment.

You and Bob are taking hex terrain to an art form :)

My own Hexon collection is very modest at the moment but even with the limited selection I own the results look very impressive. I tend towards the more functional looking as opposed to artistic but for a good example of just how fantastic this stuff can look take a look at the Kallistra site - now that is an art form and no mistake!