A Game of Armoured Combat 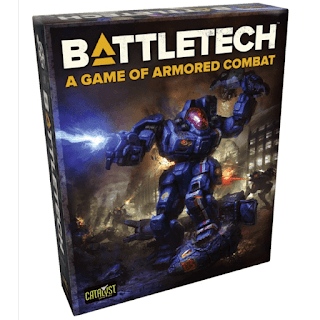 Giant fighting war machines ranging from 20 to 100 tons and with enough firepower to, in the words of Private Hudson from the film Aliens: “Fry half a city with this puppy!” What’s not to love?

Although the Del Prado Napoleonic collection is still very much front and centre in respect of my gaming activities, there are a couple of other things I have on the go. I should qualify that statement by saying that ‘on the go’ may be a tad on the generous side as these are projects for which the only progress that has been made thus far is the acquisition of the raw material to undertake them!

I have already mentioned about my WW1 naval fix via Avalon Hill’s Jutland but the subject of this post is something altogether very different - or perhaps not.

I enjoy a variety of Sci-Fi gaming backgrounds and currently Red Alert by Richard Borg - a Command and Colours game - and OGRE by Steve Jackson are my particular favourites. I also have Abaddon - another Richard Borg game - which features large piloted fighting machines called ‘Links’. Of course the premier game of Sci-Fi armoured combat involving large fighting machines is Battletech. 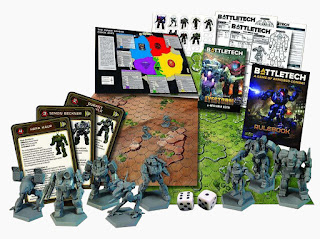 The contents of the base game

Battletech has been around for over 30 years in one form or another and it has both a large and global fan base. There is a whole background supported by numerous novels and of course a very healthy supply of models in both metal and plastic. When an updated version was announced - last year as I recall - my curiosity was piqued and so I made a mental note to acquire a copy at some point. The game appeared to be in relatively short supply in the UK and so despite my admittedly languid efforts I was not able to get a copy. Fast forward to this year I have finally been able to rectify this and so am now the proud owners of not only the game you see above but also a second set of the miniatures as well as the hardback edition of the complete rulebook.

The base game comes with 8 Battle Mechs ranging from the largest to the smallest and these are made from a toughened polythene material. They are really nicely done and the beauty of this game is that you do not need many to have a good game so my collection of 16 models will be more than sufficient for my immediate needs. The game is hex based and as can be seen from the accompanying pictures, using Heroscape tiles would be a really good option to explore. 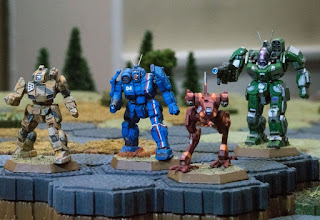 Painted versions of the base game Mechs in use with Heroscape tiles (of which I have rather a lot!).

There is also a set of fast play rules for the system called Alpha Strike - an introductory version is available as a free download covering pure Mech battles - which are available but are pretty expensive - perhaps something for a later day.

The game is quite detailed - almost skirmish like - and so Mechs have a bewildering array of weapons and armour combinations to play around with depending on the type being used. Damage is recorded on control charts that feature hit location and the armour value thereof. Being giant fighting machines also means that melee combat features with some more predisposed to this than others - especially if your Mech does not have any arms!

The earlier comparison I made with naval games was due to a couple of reasons. Both (usually) reflect damage to specific systems via a damage record sheet, both require minimal amounts of models to have a really good game and finally there is plenty of variety within the four notional types of Mech in the game - light, medium, heavy and assault (you get two models of each type in the base game).

As a Sci Fi side hustle for me this game will tick a lot of boxes. To begin with painting 16 Mechs will present little difficulty and will be something I will enjoy. I can (finally) make use of the substantial amount of Heroscape terrain I have and I am safe in the knowledge that there is more than sufficient online resources and background material to tap into should I wish.

Besides, the models are really good!

Funnily enough I was watching 'Pacific Rim: Uprising' on Netflix last night, which is visually spectacular and as a result piqued my interest in digging out some Mecha type models that are, I think, languishing in the loft. So your post came at an opportune moment and I may have a look at the free rules mentioned...

I need to check out the Pacific Rim films - purely for research purposes you understand....:-)

Classic BattleTech, stompy giant mech action, which I have played on and off for so long it has become part of my go to gaming action.

I had a feeling this would be of interest! As you rightly say - stompy giant mech action!

I am looking forward to tackling the painting of these.

Surely no one could argue with such sound logic ;)