Phase 1 complete! All of the figures from the Del Prado collection that are being used have been rebased. This is around 150 mounted figures and 350 or so foot with 15 guns (these are staying unbased). I have managed this in just over a month which, allowing for the week off and travelling, birthdays and our wedding anniversary is pretty good going in my opinion.

The next step is the bases themselves in that they will need to be sealed (I have used 25mm circular bases for the foot figures and 50mm x 25mm ‘pill shaped’ bases for the mounted - on both cases these are 2mm thick and are the same as those I used for the ACW collection), given two coats of Humbrol Satin 131 and then varnished Matt. I will tackle the whole collection at this stage as the next part - touching up the odd dink and scuff and the few paint conversions I am planning - will need to be done in batches rather than en masse. Once this is completed then the whole lot will get a fresh coat of gloss varnish (the bases will be Matt) and and will be ready to go!

In the meantime though I thought it would be a good idea to show you the French part of the collection. 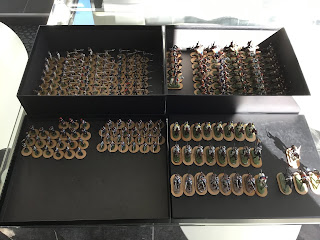 The French army in its entirety - well not quite as the guns are in another box. 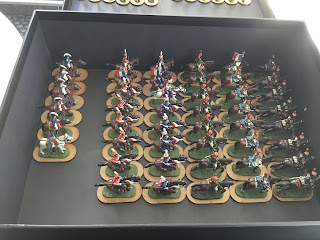 Mounted commanders (including the man himself) and the following: Horse Grenadiers of the Guard,  Carabiniers, Chasseurs a Cheval of the Guard (actually they are what appears to be the elite company of the 3rd Chasseurs but further research will be needed to check) and Polish and Dutch Lancers of the Guard 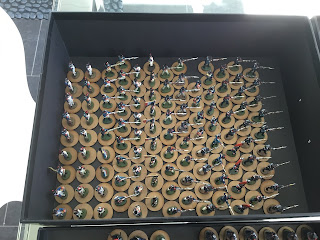 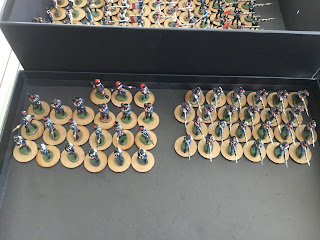 There are a few holes in the French army that will need addressing and I have been very fortunate in that the recent box full of goodies from Bob Cordery has really helped with the collection. I have been able to bulk out nominal units with plenty of command figures.

Now that I have completed this phase it has given me the opportunity to not only become acquainted with the figures but also to think about the provisional organisation of units. For Command and Colours based scenarios then using one figure for one block I can for the most part cover. This only applies to the scenarios in the base game using a 13 x 9 hex grid which is the size of the playing area I will be using.

For smaller CaC:N scenarios or those of my own invention I will be adopting the following standard. Infantry 6 to 10 figures, Cavalry 6 figures and artillery 4 or 3 figures. This will give the appearance of bigger units and will fill the playing space rather better. I will try to use two figures to equal one block but with the cavalry the 6 figures will represent 3 or 4 blocks depending on the nationality. I have a plan for how to manage this. When I used to fight actions using the block armies (using rules that derived from Command and Colours) the sweet spot for games was usually no more than a dozen units a side which the collection can cover comfortably although the Prussians are a little on the light side at present.

I have made no mention of the next steps after completing this lot as this will be the additional units that Del Prado do not produce. I will be using Tradition figures as they are closest in style to the bulk of the collection.

Lots to look forward to then.

I am looking forward to getting them finished (along with the opposition) and they certainly look the part so far, even in their unfinished state.