So it is March 31st and the end of the first quarter of the year. What a life changing and momentous twelve weeks it has been! I hope everyone is safe and well and also that this dreadful virus is speedily overcome so that we can get back to what will undoubtedly be the new normal. 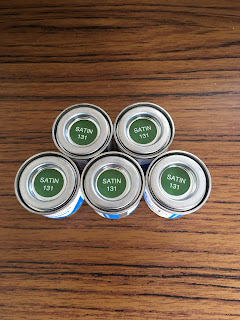 Phew! I was down to my last tin before this most welcome package arrived this morning - talk about in the nick of time!

I am working from home up until the close of business today when I have placed on a 3 month furlough. SWMBO has a list of DIY jobs large enough to have its own post code (and as fast as one thing gets crossed off so another gets added!) and so it is probably just as well that my electrician son is at home as well. It is strange getting used to being in close proximity with the family when we are normally spread to the four winds!

My grandson is with us at present and it will be his 10th birthday tomorrow. I am going to introduce him to the delights of wargaming this week with a small action (I am thinking 6 units a side) using my Spencer Smith ACW figures and probably the Portable Wargame as the rules of choice. I will be posting this on the blog once fought - probably later in the week.

Yesterday the last small order of Del Prado figures arrived and these 20 odd figures have been based and prepped ready to paint. I shall do these next before the French as most of these are for the armies already completed. In retrospect I wished I had tackled the French first rather than both allied armies although it doesn’t really matter in the overall scheme of things as they all needed doing!

In the meantime though, here are some pictures of what has been completed so far. 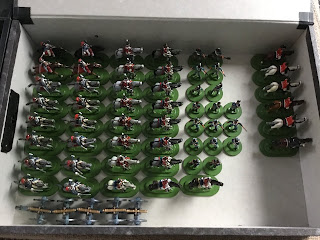 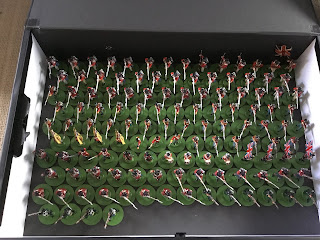 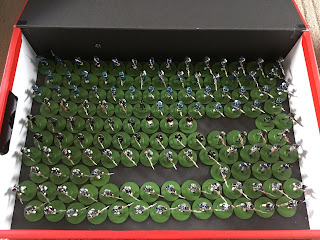 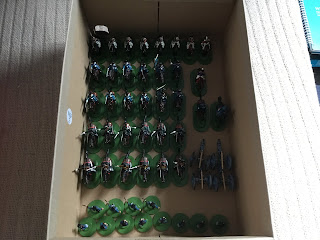 The French part of the collection is by far the largest of the three forces, especially in respect of cavalry and artillery. There are currently eight units of horse with a further five on the horizon which is an impressive total for sure. I am reckoning on around ten or twelve twelve figures infantry units of which four are from the Guard - one each of Grenadiers, Chasseurs, Tirailleurs and Voltiguers.

The armies as they stand are far larger than I would usually use for Command and Colours but this is fine as I fully intend using other rule sets that need units rather than individual figures.

It is getting there, slowly but surely.

Great to see all that you have based and painted where required, which is certainly impressive. I had planned to do loads of DIY but with B&Q closed (and similar stores) I can't. Wargaming it is then;)

I was very relieved when the post arrived today as there is no way that I have enough paint for the French. This far I have used up around five tins but that also includes the ACW figures.

I reckon the French will take 2 possibly 3 tins. I have some terrain pieces that will require the same colour but more about that later.

We have a number of DIY projects on the to do list but with everything closed up it will be challenge although there are some things we can do.

It's a shame about B&Q, as I was about to suggest a possible DIY approach to your base colour supply issues: they have a paint-matching service which will do you a nice 236ml 'tester' pot of almost any shade you can think of, matt or satin, for about £3 I think! This idea suggested by Trebian on his blog, with the added advantage that he paints the gaming board with the same shade - very clever.
Anyway, I hope the furlough period is OK for you, and productive in both gaming and DIY fields!

I hope you are well old chap! A number of gamers have used this method and it is something I will try for my desert set up in due course.

"Strange Days" we live in Dave