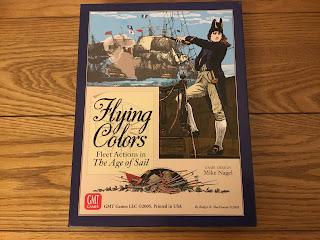 This is the first edition and came to me in an unpunched and unused condition. There are some issues with the rules in that they are quite 'bloody' but the updated version available as a 'living' rule set from the GMT website goes a long way to addressing this. 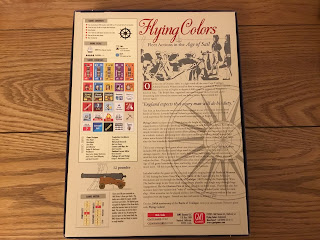 There is a lot of counters in the game and best of all the ships have names rather than id numbers which is a massive plus in my book!

An important part of my planned Napoleonic adventures is of course the naval dimension. Over the years (although not recently) I fought a number of games set during the age of sail and they are enormous fun. I have probably fought more board games on the subject than using models - mainly because the work needed to produce the ships required is far more labour intensive than I would like. Time is the factor for me and so painting and rigging dozens of 1:1200th scale models is beyond me - having said that I am looking at 1:2400th, possibly even 1:4800th as an alternative but that is something that is a long way down the list. I am currently looking at the Trafalgar book by Peter Dennis with his famous 'Paper Boys' cut out ships as a quick alternative but we shall see. 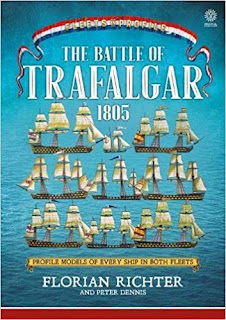 A follow up volume covering ships that were not at Trafalgar - especially the smaller ships, frigates, brigs and sloops, not to mention merchantmen - would be really useful!
The main board game covering the period that I have used the most is of course Wooden Ships and Iron Men published by Avalon Hill. I actually preferred the miniatures rules that the boardgame originated from - Ship 'o The Line with the main difference between the two being that the board game was fought on hexes whilst the miniatures rules used squares and was far more detailed. 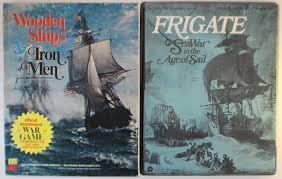 An honourable mention should also be made of the old SPI game Frigate (designed by Jim Dunnigan of Avalon Hill Jutland fame) with which I remember fighting Trafalgar.

Much as I enjoyed Wooden Ships and Iron Men it is not without a few problems. The level of detail is such that it works best with around a dozen or so ships a side in my opinion and anything larger quickly becomes very unwieldy (probably much like the real thing!). I want to fight manageable fleet actions so I needed a set of rules or a board game solution that would allow for this type of engagement. the end result of my search led me to the game you see at the beginning of this post. 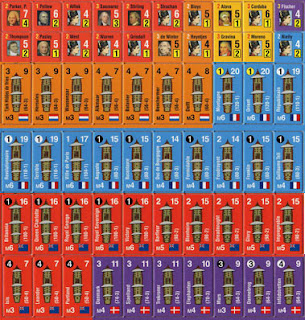 Sample counters from the game. Note the Leader counters

To describe the game I can do no better than to quote boardgamegeek:

Flying Colors recreates naval actions during the height of the Age of Sail, from small engagements to full battles involving dozens of ships in each fleet. Play is fast, furious, and does not require the pre-plotted movement found in many other naval games. Instead, a simple initiative and command system allows players to activate and maneuver their fleets in a realistic manner, indicating how older commanders adhered to rules of engagement where more forward thinking commanders, like Nelson, could retain control of their fleets after the first broadsides began to be exchanged.

Rather than focusing on the abilities of individual ships, Flying Colors uses broad classes of vessel within each "rate" and concentrates the players minds on maintaining command of their fleets using a simple command system.
This is not a strategic level game where one piece represents several ships. Flying Colors includes 300 individually named ships rated for size, gunnery, boarding ability, and damage capacity. Also included are nearly four dozen individually named commanders, rated for their ability to control their formations as well as the impact of their presence within the fleet. The game system provides what naval enthusiasts will expect in a tactical Age of Sail game: broadsides, rakes, anchoring, wind effects, weather, shore batteries, and much more. All this is packed into a short, accessible rulebook.
Included within the game are 17 historical scenarios ranging from the Battle of Minorca (1756) during the Seven Years War to the Battle of the Capes during the American Revolution and on through the Battle of Trafalgar (1805) during the Napoleonic Wars. The battles range in size from small engagements playable on a single map through huge engagements like the Glorious First of June playable on three maps. Players are also free to create their own variants and "what-if" scenarios using point values for each ship. Most scenarios can be played within a few hours and two players can complete even the largest within a day. Several are also well suited to solitaire play.
Scenarios:Minorca, 20 May 1756Cape Henry, 16 March 1781Virginia Capes, 5 September 1781Frigate Bay, St.Kitts, 26 February 1782The Glorious First of June, 29 May through 1 June, 1794Audierne Bay, 13 January 1797Cape St.Vincent, 14 February 1797Camperdown, 11 October 1797Bec du Raz, 21 April 1798The Nile, 1-2 August 1798Goza de candia, 18 August 1798El Ferrol, 25 August 1800Copenhagen, 2 April 1801Algeciras Bay, 6 July 1801Gut of Gibraltar, 12-13 July 1801Cape Finisterre, 22 July 1805Trafalgar, 21 October 1805Cape Ortugal, 4 November 1805
1st edition Components:
TIME SCALE : 5-10 minutes per turnMAP SCALE: 100 meters per hexUNIT SCALE: Individual ShipsNUMBER OF PLAYERS: One to Four
As is usual with my approach to board games I have several cunning plans for this game - some of which even involve playing it as written (that would be a first!) - and models will certainly feature at some point. Having the names on ship counters is a blessing though and is certainly a viable short term alternative to using models. Although my land based Napoleonic games will be firmly set in the 1812 to 1815 period it will not stop me from thinking about the naval dimension in some way.
I have missed looking at matters age of sail naval related and so the arrival of this game is very timely. It is altogether at a different level to what I was previously considering - frigate sized actions, possibly using Black Seas - but am looking forward to seeing what it has to offer.
In the meantime though, and as a moment of whimsy, have a read of the poem below. It certainly inspired me and the title of this post!

Interesting post. Very much enjoyed WS&IM back in the day. I also have a copy of Ship 'o The Line.

I was looking long and hard at the ranges from Tumbling Dice but I have a way to go before committing to anything specific.

Ship 'O the Line are a really good set of rules that I would happily use again.

As a lifelong Napoleonic enthusiast I was, a couple of years ago, drawn for the first time to the naval element that I had mostly neglected, by reading Sharpe's Trafalgar by Bernard Cornwell of all things. I had possessed WS&IM for many years without ever actually playing a game. Inspired by Cornwell's narrative I got the game out and tried to do some solo playing with the basic rules but found them a bit too detailed - perhaps they are as much of their time as the Bruce Quarrie rules you mentioned in an earlier post? So I found myself a copy of Flying Colors on BGG and had a solo go at the Battle of Cape Ortugal which seems to be the most basic scenario. I very much enjoyed it; the game became a splendid narrative, and the only reason I didn't take notes for an after-action-report was that I was convinced that I was getting some of the rules profoundly wrong, which just goes to show how I would have struggled with that solo game of WS&IM! Certainly I would like to get a 2-player game of Flying Colors in progress at some point.

(Honourable mention here should be made of my mate Dave, the Ragged Soldier, who when he heard of my newfound Napoleonic naval interests leant me his copy of S&T's Fighting Sail game, which alas I have not as yet done more than have a quick look at)

Getting some nice miniature tall ships on the table would indeed be awesome. I have a copy of that Paperboys Trafalgar magazine too but have not had the courage as yet to try assembling the ships. I am fairly maladroit when it comes to assembling models, unfortunately, and have both poor eyesight and a very pronounced essential tremor that make such things really quite difficult - I have for example assembled some paper buildings using the European Buildings Paperboys magazine and while some of them look okay I have managed to do a pretty shocking job on some of the others :-(

I did briefly consider the Sails of Glory series. I played Wings of Glory a few times some years ago at the Epsom Games Club and found it great fun, and SoG seemed to get a lot of love also. My main problem was the expense - the already fairly pricey starter set is just two ships of the line and two frigates, with expansions available for each individual ship beyond that, so building up a sizeable force seems something I was never likely to do because of the cost required. But the miniatures are very nice and I imagine would make a visually striking as well as a thoroughly enjoyable game.

Incidentally, I always loved that poem, as did my old Dad who was in the merchant Navy and was very much an old sea dog. I liked Spike Milligan's version too:

I must go down to the seas again, to the lonely sea and the sky.
I left my vest and socks there - I wonder if they're dry?

It is rather strange in that whilst the miniatures rules Ship ‘o The Line are more complex that Wooden Ships and Iron Men they seems o be easier to use. I could never get my head around that.

Fighting Sail is good albeit it very much a product of its time. There is an expanded version that covers large ships and with the rules being for use on a tabletop rather than a grid.

I loved the idea of Seas of Glory but as you say, the cost was very high for what you actually got in the starter set. If I ever get around to trying out the Peter Dennis Trafalgar set then I would simply cut the ships ‘square’ rather than attempting to follow the masts and hull. The white space around the ship I would merely colour in sky blue!

I have a number of ideas for use with Flying Colours and it looks like a cracking game.