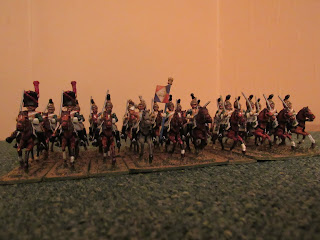 Minifigs 25mm Napoleonic French Dragoon regiment Number 17, 20 strong and from the collection of Mr Fox, kindly donated to the Del Prado collection of yours truly.

It is no secret that the biggest single problem with the Del Prado Napoleonic collection is that it was designed for a diorama rather than for a wargame. This means that the range of figures is limited to a particular point of the battle represented. There are a number of holes in the collection that can only be addressed by using figures from other sources. Therein lies a minor difficulty as many of the figures are rather on the small size, being 25mm rather than 28mm. There is a further complication in that some of the figures are quite large and are fully up to current 28mm figure standard - the British Guards and Highlanders and some of the French Light Infantry (only those kneeling firing which is a little frustrating).

In order to address the shortfall in troop types one is forced to look elsewhere and for the most part figures similar in style and build can be found in the Tradition 25mm range - this will be my preferred choice in due course - so I have been looking long and hard at what i will need from them. the list seems to be getting larger as the days go by but I reckon I am close to knowing what I shall be needing.

From an unexpected but most welcome source came the rather attractive Minifigs 25mm French Dragoon regiment you see above. This was kindly donated by the redoubtable Mr Fox and had been lurking in his very own Area 51 for rather more years than he cared to remember. The regiment is 20 figures strong and includes all the usual 'flam and paradiddle' one would associate with an old school wargames cavalry unit. They are based on beer mats - the only basing material that gamers of a certain vintage will remember fondly (at least acquiring them in any event!) - which will be really easy to remove compared to the more modern MDF types.

Whilst the figures themselves are in very good shape the years have been less kind to the paintwork. For sure they look fine in the picture but a closer inspection reveals a fair amount of what looks like paint having been rubbed off or even just flaking away. I actually had some paint breakaway from the figure merely from being handled. Originally my plan was to just rebase and varnish the figures but it looks like rather more work will be needed to get them 'match fit' so to speak. Best I dig out my tins of the old Humbrol Authenticolour: French Dragoon Green then!

Under my planned organisation, which has mounted units being a maximum size of 8 figures, I will be able to produce two units. When used for Command and Colours then I can get 5 x 4 figures units which will be more than sufficient for my needs.

I also acquired from Mr Fox an unpainted Minifigs 20 figure French Line Chasseur a Cheval regiment so I shall be able to organise this in the same fashion as the Dragoons.

These two units will give my French army some much needed line cavalry and so my warmest thanks are extended to Mr Fox for his generosity!

Coincidentally I have just finished painting the 17th Dragoons myself.

Small world eh? I suspect that mine will be getting a repaint at some point and should this come to pass I will be getting.a pair of units from the 17th which will work better with my organisation.

It will be sometime though before I get to that stage.

These would be the line variety. I am having a think about them.