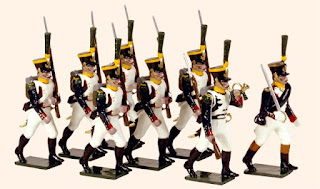 French Voltigeurs from Tradition of London

Yesterday evening I was able to seal the bases of all the French mounted troops - 64 cavalry and 10 mounted commanders. The remaining French will be similarly processed by the weekend when I shall then look to the Allies.

In the meantime though, I have been giving some thought to the additional units I shall be adding to the collection - mainly as the Del Prado range does not include them - as well as the paint conversions I shall be undertaking.

The new units I shall be raising are as follows:

From within the Del Prado range itself there are a few models that I have earmarked for paint conversions. This could potentially be a bottomless pit in many ways so I shall confirm myself to that for which there is a pressing need. It is a lot less than the ‘new units’ section above!

For the British I want to paint some of the Life Guard figures into the Blues. This will be straightforward to do but as yet I do not have enough figures – I need another four which will give me two units each of 6 figures. I am also considering repainting half of the British Hussars to represent another regiment but have yet to finalise this. British line infantry is a little problematic as the only figure has yellow facings. It would be nice to change this for some other units but it would be a fiddly undertaking – especially as the regimental colours are in yellow as well! It may offend the purist but I am tempted to leave them as they are so all the British line infantry will be represented by regiments with yellow facings (actually pale yellow for the 30th Foot).

I have rather a lot of Guards and Highlanders – rather annoyingly without sensible command groups – and whilst the former is naturally rather limited (3 units only) the latter has a lot more potential. For sure the figures have an oilskin cover over the shako and are wearing white trousers but that is nothing that a repaint into grey would not put right. The problem of course is that the facings are blue which will impact collars, cuffs and turnback’s. For those that are pedantic there is also the small matter of flank company shoulder furniture. For the Highlanders there is the question of the ‘set’ of the tartan - a subject that I simply avoided back in the early 1970s by the simple expedient of painting the Airfix kilted Highlanders using a plain dark blue or green for the kilts and facings. Oddly enough at table ranges they did not look too bad.

My plans for the French are along similar lines. I have some spare light infantry kneeling firing that are going to be paint converted into line infantry Voltiguers and I am also planning a large scale shako cover offensive. I did toy with the idea of painting some Old Guard Grenadiers as Guard Chasseurs but I do not have any spare figures to do this with although it would relatively straightforward.

The main thing with all this is simply that I need to eke out the collection as much as I can and so by adding a few new units and tweaking some of the existing range I can do this.

Besides, it is quite good fun!

I've have recently begun painting up a small batch of Crimean War Highlanders for my Ruberian Army. Not wanting to use an existing tartan, I 'invented' one: Blue cross hatched over green, with a narrow white thread also cross hatched. Has I chosen yellow for the last, it might have suggested the Gordon Highlanders, I think. At any rate, they will be known as the Dearg Highlanders...

As mentioned before, life is too short to worry about facing colours etc IMHO. Personally I'd get everything painted and onto the table and then if you have the time and desire, then go back and address said facing colours.

Now there is a brave man! With my Airfix figures I really bottled it and went with plain dark blue for the 42nd and green for the second unit. The tartan on the figures I have us really nondescript so sticking to the same standard should probably be easy enough if I could be bothered.

Something for the future perhaps.

I like your thinking on the subject! I have more pressing paint jobs to tackle first so attempting regimental distinctions is some way away yet.