The Great War at Sea via Jutland 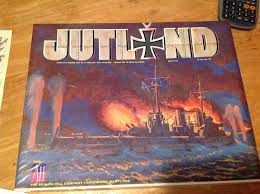 Long time readers of the this blog will know that I am fond of WW1 naval games and in particular the game published by Avalon Hill based on the Battle of Jutland in 1916. Jutland is a unique game in that it does not use a grid based playing area as the ship counters are deployed directly on a tabletop or other large playing surface. It is, for all intents and purposes, a miniatures game. I have spent many happy hours playing this game and many unhappy ones trying to turn the game into something a little more 'wargamey' but with mixed success. There are variants and optional rules aplenty contained within the pages of the old Avalon Hill General magazine as well as the Boardgamer that followed it.

A compilation of the articles that appeared in the Avalon Hill house magazine: The General

I have pretty much everything that was published about the game  - certainly from the two sources mentioned in any event - as well as a whole selection of variant counters for other nationalities. I have not invested in the Tsushima variant for the Russo Japanese War although I have the articles, scenarios and ship charts for the same. I have the order/damage pads, game movement and range finding devices and the rules but what I do not have is the complete game itself (actually there is also a set of search cards available that I have yet to acquire but for completeness sake I really ought to!).

The copy I own is incomplete and indeed whilst I have everything from the game itself sourced from various suppliers it has been very much on my to do list to obtain a complete version - and I have!

It is going to be a real pleasure to be able to store most of my Jutland collection in one box - I still have the counter sheets for the Austrians, Russians, Turks, French and Italian fleets to punch out - as it is currently located on a shelf in a less than orderly fashion. I am also hoping that this will now enable me to spend some time organising the system for use in the man cave - especially with the Mediterranean plot maps I have. There will be a frenzy of photocopying and printing to attend to but the great thing is that it would be ready to use more or less at the drop of a hat.

I have given some thoughts about how best to make use of the material I have for this game and to be honest at this stage it probably does not involve using models although who knows?

Plenty to be getting on with in the meantime though!
Posted by David Crook at 11:14

I loved this game when it was first published and it launched a life long interest in naval gaming. One near contemporary and more easily played game I didn't acquire was SPI's Flight of the Goeben.

I never owned a copy of Flight of the Goeben but can imagine it would be an exciting game - the real world version was tense enough!

There is a scenario for it in the Jutland Mediterranean variant and it is certainly one that is on my 'to do ' list.