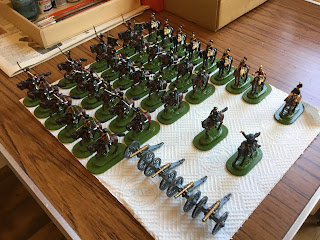 The bases really made the figures ‘pop’ and I am really pleased with how they look. Once again, getting up close and personal with the figures does show up the ‘dinks and scuffs’ but I am fully prepared to deal with this in due course. The plan is to paint all the bases and then matt varnish them prior to the painting stage which will then be finished off with a generous coat of gloss varnish for that ‘old school’ look.

I also assembled the artillery component of the Prussian army - in this case four ex British 6 pounders. The British supplied a number of guns to Prussia when she was throwing off the French yoke during 1813 and many of their batteries were made up of British guns although I am unsure how many.

All in all a good start to this phase of the project and I hope I am able to sustain this over the next few weeks.

I am rather pleased with the basing choice as it suits the style of the figures very nicely.

They look really good and I agree that when that green base paint goes on, it somehow makes the figures really jump.

They look great David, it's going to be quite a collection once finished. I think you did the right thing with the individual basing and option to use sabots. A game of Commands & Colors on your hex printed mat will look excellent.

I was pleasantly surprised when I completed the first of the bases as it shows up far better with the more colourful uniforms of the Napoleonic period than for the ACW, for which I am using the same system.

Once the gloss varnish goes on they will look really good.

It gave me much pause for thought in respect of the basing as the convention Bob Cordery used looks really effective and I very nearly went with that. However I am pleased with my final decision and as you rightly say, using sabots (which are on the way) will work well for other things.

I am working on an idea for hills to go with the C and C mat and this will feature on the blog soon.