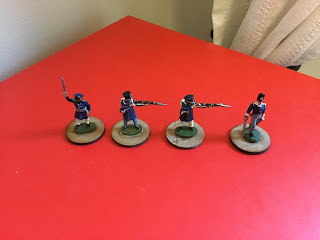 A selection of Prussians with a Dutch-Belgian officer on the right. These are figures that I need some more of - 2 for the Prussian Officer on the left and 1 each for the remainder.

I have finished sealing the bases for the remaining troops of the Del Prado collection - this being the Prussians and Dutch-Belgians. This means that I am now in a position to start painting the bases prior to the touching up of the dinks and scuffs as well as the planned paint conversions and the refurbishment of the French Dragoon regiment. 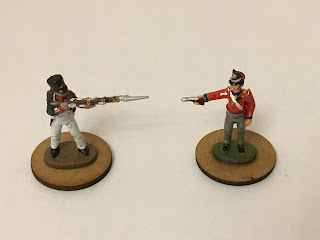 I am feeling particularly pleased with myself over this as it means I can get to the enjoyable part of the process - the painting, and I never thought I would be saying this! I have identified a few more gaps in the collection - nothing major and certainly not enough to stall the project - which I am in the process of filling. For the most part these are odd figures here and there and have only arisen as I have changed my organisation slightly.

I plan to get the Tradition order together sooner rather than later and it will now be smaller than I originally planned, primarily due to the acquisition of the Dragoons and Chasseurs a Cheval from Mr Fox.

If I were to be using the figures as direct 1 for 1 replacements of Command and Colours blocks the collection as is would be fine. However, as I am looking at other rule sets then the need for command figures becomes more pressing and this is what I shall be tapping into Tradition for.

Now we get to the good bit!

Oh! I like those Prussians especially. I’ve just had one of those “oh shiny” moments.

They do look rather splendid en masse. The Prussians are very much the poor relations in the Del Prado world and so I plan to raise a few units for them from alternative sources. They need some regular infantry, jägers and a unit of Cuirassiers to round them off and I will get to that in time.