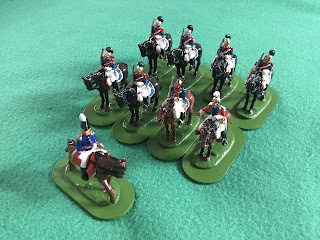 Of the three regiments of Dutch - Belgian heavy cavalry at Waterloo the 1st and 3rd regiments were Dutch whilst the 2nd was Belgian. All were similar looking with regimental differences being limited to (as far as my limited research has taken me) facings. I have a single unit of these fellows in the Anglo - Dutch army and I rather like them. The pose is one that I favour for horse units of any type really, standing at the halt ready to move.

I would have preferred this pose for the Horse Grenadiers of the French Imperial Guard but instead we have them sitting bolt upright on horses at full gallop - far too animated for my taste as even the Guard Chasseurs are only ambling along at a steady trot.

This post is designed to be the first in an occasional series featuring completed units from my Del Prado collection. The figures themselves are due to have a second coat of gloss varnish with the bases finished in matt but other than that they are in pretty good order.

The Dutch component of my collection will be expanded in due course as I rather like the idea of adding some light cavalry and artillery at some point but that will be something to think about in the future.

It's all coming together Dave.

I have got to say that this project has really given me a ‘shot in the arm’ so to speak. It is almost like starting out all over again but with the benefit of experience and knowing what to do and how to do it. I know that the purists will sniff somewhat disdainfully at using prepainted figures from a limited range but all i can to say to that is I have not as much fun as this for ages.

I am even looking forward to painting figures again - mainly because there will not be a lot of them - a very important psychological for me I can tell you! - and even tackling a few units.

Who would have thought it?

Another lovely unit and I agree about the static pose.

This is going to be a spectacular set-up when you have everything ready, David. Something not quite right here? I spent many years convinced that if it didn't

(1) depress the life out of me
(2) make me feel guilty because I hadn't kept up with my painting schedule
(3) make me feel even worse when I did produce some painting, because the quality was execrable
(4) commit me to an endless search for figures from a manufacturer who suddenly didn't exist any more
(5) prompt lectures from my elders and betters because it wasn't PROPER wargaming

then it couldn't possibly be (the aforementioned) PROPER wargaming.

There is a real risk here that you will put together a really enjoyable game, without damaging health, solvency or self-esteem in the process. Where's the fun in that?

Seriously - looks great. Please invite me for a game after the Armistice.

They do look rather nice and there is plenty more where they came from - wait until you see the French!

It is going to look rather good when it is finished and naturally you are invited for a game once the Zombie Apocalypse has abated. The last of the British bases are done so next up are the French - and there are rather a lot of them!

It does need work and in many ways this is good as it will feel more like mine when it is finished - that will take care of the five points you mentioned!

I have got previous Form for buying a partially completed army and then making it my own - in fact I may even draft a blog post on it!