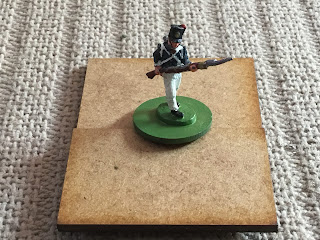 The above fellow is listed as ‘36th Belgian Chasseurs advancing from Braine - BEL 41 Private Marching with Fixed Bayonet’ on the Del Prado figures list. I have around forty or so of these with ten having had their trousers painted grey. Realistically I only need around half that number so what to do with the rest? What indeed....

It is fair to say that the figures that make up the Del Prado Relive Waterloo range are a little like the Curate’s Egg i.e, good in parts. There seems to be a couple of designers at work (I have no idea about the origins of the figures) and overall there seems to be two mains styles, at least within the ranks of the foot figures. The British Guards and Highlanders are huge figures that would easily fit in with things like Foundry, Front Rank or similar whilst the rest are rather more modest in their overall build. One such fellow is the chap you see above.

He is wearing a Belgic shako and the large shoulder rolls are quite muted on the figure and so could easily disappear altogether, either filed away or merely painted over.

I am thinking that he could be used for some late Peninsular War Portuguese troops, possibly even as the famous Cacadores. A quick thumb through the Blandford title shows the famed ‘Barretina’ shako in use although it was phased out in favour of the British stovepipe version which in turn was phased out in favour of the short-lived Belgic shako. I reckon it will do for the Portuguese - there, I have traumatised the Napoleonic purist - so that is where my thinking is at present.

My grateful thanks to that very nice chap MSFoy for his input on the whole Portuguese headgear dilemma.

Having a small Portuguese contingent will enable me to look at some of the later operations in the Peninsular which will give me some variety from the more usual 1815 period games I will be playing. More to follow on this in due course. 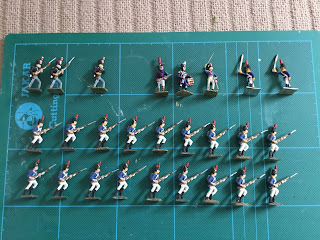 The above unit came from the collection of Eric Knowles and is intended to be a Belgian unit for 1815 (I think). As was usual for Eric there is a mixture of ranges within the unit and one of the Dutch figures (top left) has been converted into a standard bearer. Most of the unit is, I believe, Hinchliffe but the two officers (top right) look to be Minifigs S Range.

I came across the unit above mixed in with some 18th century units from the collection of Eric Knowles. Originally they were on bases but time had meant that a number had fallen off so I opted to finish the job and so you see them above. They fit in rather nicely with the Del Prado collection so I may well see about a repaint into something else. 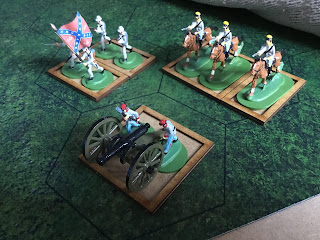 Finally, I had a mess around trying out the ACW collection with the new movement trays. I am rather taken with the notion of using a single 2” square base to contain a gun and two gun crew and indeed, this may well be the standard I opt to use going forward along with the 4 infantry or 3 cavalry.

I am still undecided about the movement trays though - to paint or not to paint, that is the question....

Get the bases painted a plain green David. No old school wargamer would leave them a plain brown colour. The look was always important.

I have been looking long and hard at them and am coming to the conclusion that painting them would probably be for the best. I will not be able to do so just yet though as my chosen colour currently is in short supply and I am unsure when i will be able to get anymore. This means it is prioritised for use on the figure bases rather than movement trays.