Dragoons and WW1 at Sea 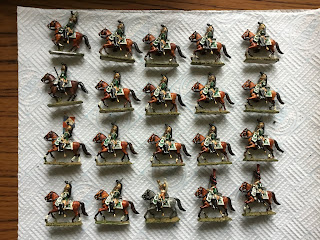 French Dragoon regiment number 17. Now off their bases and I have a much clearer idea of what restoration work needs to be undertaken. It is a lot but it is manageable and appears to be limited to the green and white areas.

It has been an eventful week with the effects of Covid 19 beginning to be felt in many areas of our daily lives. I am not working from home yet but it will only be a matter of time methinks! Whilst thus far we have not been directly impacted by the virus we have taken the decision to cancel our planned holiday to Greece later this year as a precaution. We have certainly not been alone in making this decision but I think it was the correct course of action - better safe than sorry.

Whilst this has been going on - and as a distraction of truth be told - I have resumed work on the Del Prado Napoleonic collection. I have sealed the bases for the British cavalry and gun crews and the infantry will be next. I shall get them tackled this evening and so the Prussians and Dutch will be tomorrow. I am then ready to start on the bases which, given the imminent likelihood of having to self isolate, means I will have plenty of time to finish them!

I also undertook some work on the Dragoon regiment that Mr Fox passed over to me. They are now off their bases and I have also had the opportunity to take a much closer look at them. From what I can see the main problem appears to be with the green paint used for the jackets and saddle cloths. I suspect that theses figures were originally painted with a mixture of enamels and acrylics because the enamel paint seems fine. There are a few little scuffs but it is the green that is the main problem.

I reckon that by repainting those areas affected by the loss of paint using an enamel these will come up really nicely. A new base and coat of gloss varnish with a freshened up green and white would work wonders and so that will be another of the restoration/refurbishment jobs I will undertake. 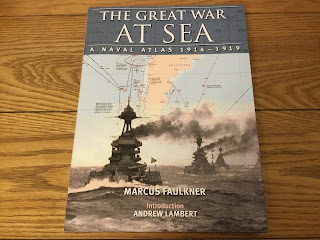 Oh yes indeed! Lots of maps and ideas for scenarios - I want to get a copy of the WW2 version as well.

I received an email from Naval and Military Press during the week featuring the above book on special offer - £10.00 down from £40 - so I immediately ordered myself a copy. The book is a large format hardback and it is outstanding. As you can see from the contents below the coverage is vast and global. It is a valuable addition to my WW1 naval library and a book I will doubtlessly refer to a lot. 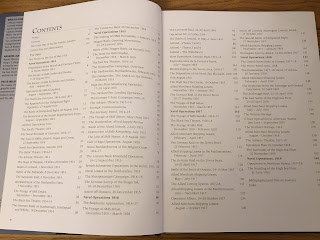 Take a look at that little lot - A WW1 naval smorgasbord!

It has been a while since I looked at WW1 afloat but perhaps this will give me the inspiration to revisit it again, probably via Avalon Hill’s Jutland and its variants.

Meanwhile though, on with the Del Prado Napoleonics.

Those Dragoons look lovely David. The horse painting is really nice and looks to be in good shape? I can see the green is peeled from the jackets in places as you say, but a touch up with a thick good quality paint should work well. Do they scale well with the Del Prado's?

The rest of the paintwork looks in pretty good shape - it is just that the green appears not to have aged very well. I plan to use a firm brush to get the worst of the pant off and will then repaint using enamels for a tougher finish. The whole lot will get a gloss varnish once the refurbishment has been finished.

Size wise they fit in well enough although the collection does have some scale issues. The main bulk of the infantry is what I call slender 28m whilst the British Guards and Highlanders are large figures and would probably fit in with Front Rank or Foundry easily enough.

I’ve not seen that book site before DC. Ordered a couple of ECW titles at good prices so thanks for bringing it to my attention.

Those Dragoons do look rather splendid:)

No problem old chap! It is rather good and Ihave no doubt I will get a lot of use from it.

They are rather nice and it is a real shame that the green seems to have given up. I hope I can get them back to something approaching their former glory.