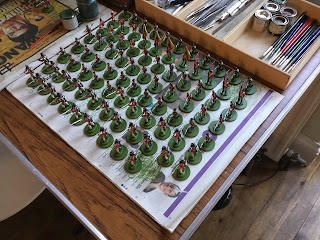 This morning was spent on the annual jet washing of the patio and drive - a job that one always feels better about after having done it rather than actually doing it! So after four hours eliminating algae, bird excrement and other assorted stains I had accrued sufficient brownie points to be able to tackle the above this afternoon.

The British army have had the first coat on their bases which means that I shall be able finish them tomorrow. Whilst working my way through the figures I was able to decide what was going to be what in respect of the overall organisation. I also came to a decision about what to do with the rather large quantity of ‘Guards’ figures I own. Large quantity is a relative term in that it means within the confines of the collection rather than in actuality! 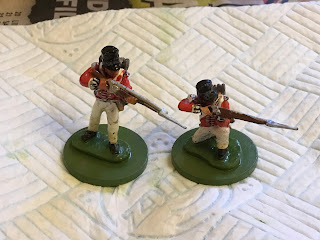 Two of the Guards infantry figures. Note the white trousers and the shako cover

One of the main aims of this using this collection was to utilise as many figures as possible without having to buy in a whole of models from other manufacturers. Of necessity I will have to do this as there are some units and figures that simply do not exist within the Del Prado range. I was rather stuck in respect of the British as the collection only featured a single line infantry unit along with a highland regiment, the Rifles and the Guards. In order to expand the troops of the line somewhat I have decided to use some of the Guards infantry as troops of the King’s German Legion.

The Guard figures are rather on the large side so they will stand out more on the table top and to differentiate them from the KGL I shall merely paint the German’s trousers grey. Rather surprisingly the Guard range does not include anything like a sensible command group so these will need to be acquired at some point. Actually the line infantry themselves only feature drummers and standard bearers so I will also need to get some officer figures for them also.

More by chance than design the infantry of the collection when used on a large scale non grid based game - I am thinking perhaps A Gentleman’s War or possibly something by Neil Thomas, not to mention Dan Mersey - seems to be heading towards 12 figures units including command. This is fine as using the figures with a variety of rule sets was always my intention, hence the individually based figures.

The only cloud on this particular horizon at present concerns my standard base green of Humbrol Satin Mid Green 131. I am down to one and half tins from which I need to give the British a second coat and then start on the French. I need some more paint as my local supplier has run out (I had the last two tins a couple of weeks ago) and although I have ordered half a dozen tins online I am not sure when these will be likely to arrive.

Cheers Ray! I only hope that the extra tins of paint arrive!

I also repainted the trousers of some of my Guards to form more line regiments. I also painted over the Guards badge on the backpack.

That was pretty much all I planned to do with them so the figures I have will be the core of two guards units and two for the KGL.

The KGL in my army also have a light battalion and I am thinking about a paint conversion of one of my British Hussar units.

They do look good and you really are making good progress with these figures. I recommend Dan Mersey's Rebels & Patriots for some fun large scale skirmish games, but I must declare I was a playtester and therefore might be biased!

Many thanks old chap! The guys from the club have used R and P with Napoleonics and it has gotten a massive thumbs up from them. It was these rules in mind I opted for the individual figures bases along with A Gentleman’s War and Command and Colours. Being involved in the play testing must have been a lot of fun.

The surprising thing with these figures and that whilst some of the painting is a little on the sloppy side once they are based they really look OK at table distances.

Confirmation of a valuable lesson methinks!