Scotland the Brave and Highland Flinging 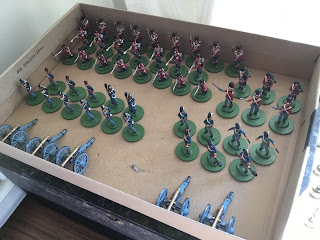 The highlanders now with some artillery support. All have the first coat of green applied to the bases. As an aside I also tackled half of the British cavalry and mounted commanders yesterday so progress continues apace albeit slightly down from the previous day.

Perhaps it is hangover from the days of Airfix soldiers but I think it is fair to say that I have always had a soft spot for the famous highland regiments of the British army. Their distinguished fighting record and I guess uniqueness in terms of dress, traditions and sheer romanticism makes them an almost obligatory unit for a horse and musket British Army.

The DelPrado collection features the figures you see above and they are rather large in build (along with the British Guards unit). I am rather taken with this and the poses certainly take me back to my Airfix Napoleonic days. I can remember fielding two Charge sized regiments each ot 48 rank and file with one unit have the kneeling firing figure in the front rank and standing at the ready in the second whilst the other was kneeling at the ready with the figure standing firing at the rear. Both of which were well supplied with musicians and standard bearers with the obligatory mounted colonel.

The two units eventually became two thirty figure formations organised as per Bruce Quarrie and of course these were then painted. One unit had blue kilts and facings (the 42nd) whilst the other had green for the 79th. I never bothered to paint the tartan and contented myself with plain blue on the grounds that it would be next to impossible to see the detail at table ranges in any event! 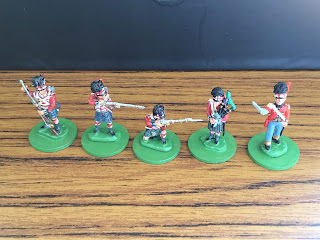 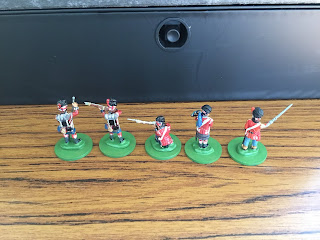 The view from the rear

The range does not include a standard bearer figure nor a drummer. I rather like the idea of adding these but I would prefer to represent each of the three regiments rather than just the 42nd. This will mean some brush work and it also means that I will not be looking to add too much in the way of command types. A 12 figures infantry unit really should only have 3 such figures in my opinion so I am torn between the drummer or a single standard bearer.

Changing the facing colours will not be too taxing but painting tartan is a whole different level of pain so I need to think carefully about this - and any pointers would be gratefully received (although offers of tartan paint will be treated with disdain!).

The army also features the Scots Greys so when completed my army will have a reasonable Scottish contingent of four units.

I believe that the forthcoming expansion number 7 for Command and Colours: Napoleonic - La Grande Battles, features for the British both highland and KGL units so it would be interesting to see how they tackle (if that is the right phrase) the renowned ‘Devils in skirts’. 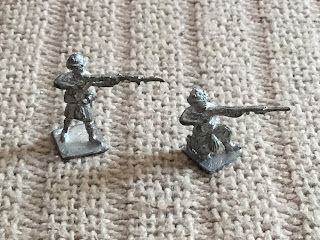 I hope you and the clan are well. They are not bad figures but they need a little tidying up on the paint job, especially the tartan!