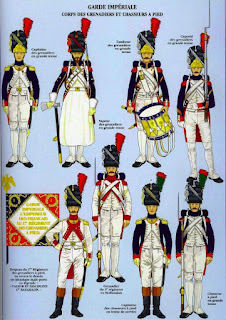 Old Guard Infantry. From what I can see (and I am no expert in respect of French Napoleonic uniforms) the differences between the Grenadiers and Chasseurs seem to be the bearskin and the cuffs. In any event a simple paint conversion would certainly be easy enough to tackle.

It has been a busy day on the domestic front - two trips out shopping and giving the lawn its first cut of the year - always a tough one - but I still managed to make some progress with the next batch of base sealing. The French army has all of their bases sealed and so next up will be the British.

Whilst going through the French a few ideas came to me in respect of paint conversions. Some of the light infantry in the standing firing pose - there are two types, one wearing gaiters and the other in trousers - are the same figures as have been used for the infantry of the line. As I am desperately short of line infantry rank and file (I only have 20 in total!) it would make sense to repaint some of the light infantry. There are only 7 figures wearing trousers so it will boost the line rank and file up to 27 figures which makes a substantial difference when you factor in the command types I am using to bulk out the units.

I will be painting a lot of shako covers - mainly because it covers a multitude of sins - and one of the other paint conversions that occurred to me was Turin I gotta some Old Guard Grenadiers into Chasseurs. The brass front plate on the bearskin could easily be painted out - it is not that well defined to be honest - and the plume repainted, along with the top of the bearskin. I shall take a closer look to see what other differences there are and how doable this is.

Tomorrow I should be taking delivery of a number of Del Prado figures acquired from eBay. These will be filling quite a few of the remaining holes in the collection so I shall be adding figures to bases first before I start on the British.

I converted my Guard Grenadiers into Guard Chasseurs exactly as you described. A very simple paint conversion, that took a matter of minutes to do.

Painting shako covers and changing trouser/breech colours from dark blue to white is an excellent way to increase the number of Line Infantry in your collection ... and is something that I would have done, had I thought of it.

It will give me a properly representative Guard for the French and as you say (and I have seen) it looks really easy to do.

I seem to have more light than line infantry so it makes sense to convert a few to redress the balance between the two types.

Tomorrow will be a big day as I hope to have a goodly number of holes filled!

And the lapels. Square for grenadiers, pointed for chasseurs.

Many thanks for that although for these figures it would probably not notice!

An emminently sensible solution David. I'm sure once on the table you will simply forget that they are conversions.

It will be a simple but effective solution methinks! In a similar vein I shall be raising a unit of the Blues to support the Lifeguards.

An alternative idea to repainting the trousers/ breeches white, is to paint white stripes down them. Apart from the added interest to the appearance of a unit (I've done that with a handful of my own French figures), there is the added flexibility: they could be line or light, as you choose.

At that, it should be no surprise to find a few individuals in a line company wearing something more resembling light infantry uniform.

I am reminded of a comment by Brigadier-General Imboden, CSA. He allowed that he only once saw anyone wearing flawless regulation uniform of the artillery. The man in question was serving in the infantry at the time...

Funnily enough I had been thinking about the whole trosers/shako thing as a lot of the French troops were quite poorly turned out by all accounts. Something to think about for sure although I would not trust my painting skills to run to stripes!