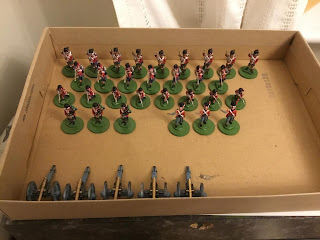 Scotland the Brave! The Highlanders underway. One coat of green on the bases and they look better already. I also assembled the guns for the British with three of these destined for the foot artillery and two for the horse.

Work is moving along with the Del Prado collection at a steady pace. Yesterday I managed to get the second coat on the bases of 143 foot figures meaning that the Prussians are done along with the Belgians, Brunswickers and a unit of KGL Rifleman. I am really pleased with how this is rolling along and this evening saw me making a start on the British.

The first up are the Highlanders you see above. These are large figures compared to the rest of the collection, in fact I reckon they would easily fit in Foundry, Front Rank or Perry. They represent the Black Watch but the tartan is a bit of a mess. Ideally I would like redo the tartan and indeed, represent some of the other kilted units at Waterloo but that will be something to think about later.

You seem to have hit a golden seam ;)

I hope i continue to tap into it!

And to you and yours. I am sure we will come out the other side but things will never be the same again methinks.

Tackling three lots of tartan is not something I had really considered but hey ho, needs must and all that!