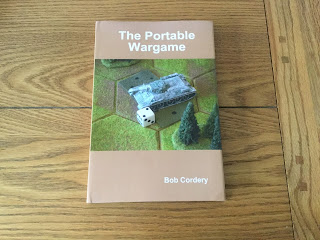 One to savour - "An elegant weapon book from a more civilised age".....(with apologies to Obi Wan Kenobi)


First of all apologies for the delay between posts. The bout of Bronchitis I thought I was over has flared up again in spectacular fashion and has coupled itself with a horrible reaction to the medication I was taking - I wont go into details but suffice it to say that for all of yesterday and most of the wee small hours of this morning moving more than 12ft from the smallest room was an undertaking fraught with peril....

I am blessed in respect of my digestive system as it can usually handle pretty much anything that it thrown at it with no noticeable effect and indeed, has often eaten things that would make a self respecting goat blanch but on this occasion the drugs did it for me in a BIG way...

On a brighter note though I received through the letterbox on Monday just gone a copy of Bob Cordery's new book - the Portable Wargame.

Readers of Bob blog - Wargaming Miscellany will no doubt have followed his thoughts and adventures with the concept of the portable war game and how much of the work of Joe Morschauser served to start the ball rolling to where we are today - with the book you see above.

This not a detailed review of the book but I will say what it is not. It is not a glossy large format chock full of artistically painted figures in use by the hundreds type of publication that seems to be the way of things these days (I know as I have plenty of these in my collection!). It does not invite you to become part of the 'Portable Wargame Hobby' and to meet up with like-minded individuals to worship at the shrine of Cordery in some retail outlet and to be badgered by acne-ridden sales people yapping about your heels like so many Jawas.

It is also grid based so if you are allergic to them it may not be your bag but having said that it would be worth adding to any gamers collection for the inspiration value alone.

This is a book that, to quote C3 PO, "Thank the maker" is refreshingly old school in its layout, tone and style. Actually I am thinking that perhaps new old school may be a more apt description.

The book outlines a brief overview of how gridded wargames have featured in the history of our hobby and also a very useful guide to the use of three styles of grid currently used - hexed, squared and offset squared. There are two sets of rules included therein - one for the 19th century Colonial scene and one for the early to mid 20th century. There are sections on representing units and a couple of rather nice and detailed battle reports - one for each set of rules. These are supported by some lovely black and white pictures that put me in mind of Battle by Charles Grant for the WW2 game.

For me though the best thing about this book is quite simple the fact that NONE of it is carved in stone. The core mechanisms are robust enough to stand any amount of tinkering and the appendix on thoughts about wargames design is a useful reminder when 'tweaking'. I would also suggest that page 12 - Some Basic Rules - should be made obligatory for ANY set of rules!

There is little for me to add to what has already been said across the blogosphere about this book so I will aid my own personal thoughts. Bob has produced an outstanding piece of work and I am delighted and privileged to have been in a small way a part of the story.

The book is available from www.lulu.com  and the ID for the hardback version is 20317595. There is a paperback and also an ebook version as well.

I for one am eagerly looking forward to trying these out - I have done so with earlier versions - and needless to say have a number of ideas to experiment with - I even have a boot sale acquired chess board just waiting for some TLC!

I know Bob has some ideas already for a follow up volume and I for one will be delighted to see that when ready.

Many congratulations Bob on a job very well done.

I agree- new old school is very chic to me. Going back to tables after years of "buckets of dice" mechanics is quit refreshing and, I think, more thrilling because more hangs on those 1 or 2 die

I am very pleased to read that you are finally getting better. You seem to have been unwell for quite some time, and I know that you are desperate to be fully fit by mid February,

Thank you for your write up about my book. New old school is an excellent description of what I was trying to achieve, and I look forward to reading about how you get on with them.

All I he best,

I had cheated a little in that I had the ebook version beforehand but nothing beats that newly arrived and freshly printed book smell! I have tried earlier versions of both sets of the rules so it will be interesting to see how the final iterations work out.

If I am honest with you Paul, rules like this are where the main focus of many of my ideas will be heading - they represent a modern take on the best of many old school thoughts, with that essential dash of Cordery magic!

Someone famous said that or maybe it was just me.