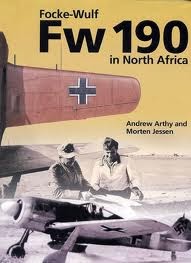 A rather unusual souvenir of Tunisia - actually purchased in the UK!

You may recall that back in January I took delivery of four 15mm scale German WW2 FW 190 fighters from the Axis and Allies Bandits High expansion of their collectible aerial combat game - see Butchers in North Africa for details. The models are ready painted in a fairly underwhelming desert colour scheme and merely need some minor detailing to be ready to use - some identification markings and the addition of the missing tail swastika would suffice. I wanted to learn more about the operational use of this aircraft during the Tunisian campaign so was absolutely delighted to come across the title you see above - so much so, that I immediately ordered a copy which arrived whilst I was in Tunisia.

The book comes across as a real labour of love in so much as the two authors have managed to come up with complete operational histories of all the 190 units deployed in Tunisia and with a day-by-day breakdown of the missions undertaken. There are tables of the fates of all the aircraft deployed as well as the records of individual pilots. There are maps (interestingly enough an airbase was located not far from Hammamet) and some very good side view colour plates of not only the FW 190 but also assorted Spitfires and P40s as well as Me 109 Gs. At full price this title should have been £29.99 but I picked mine up for £9.99 so was doubly pleased.

I hope to achieve two things by the acquisition of this book - to draw up some scenarios to game at the club and to also find the appropriate details for my models.

It also serves to give me a deeper insight to the Tunisian campaign....but that is a story for another day!