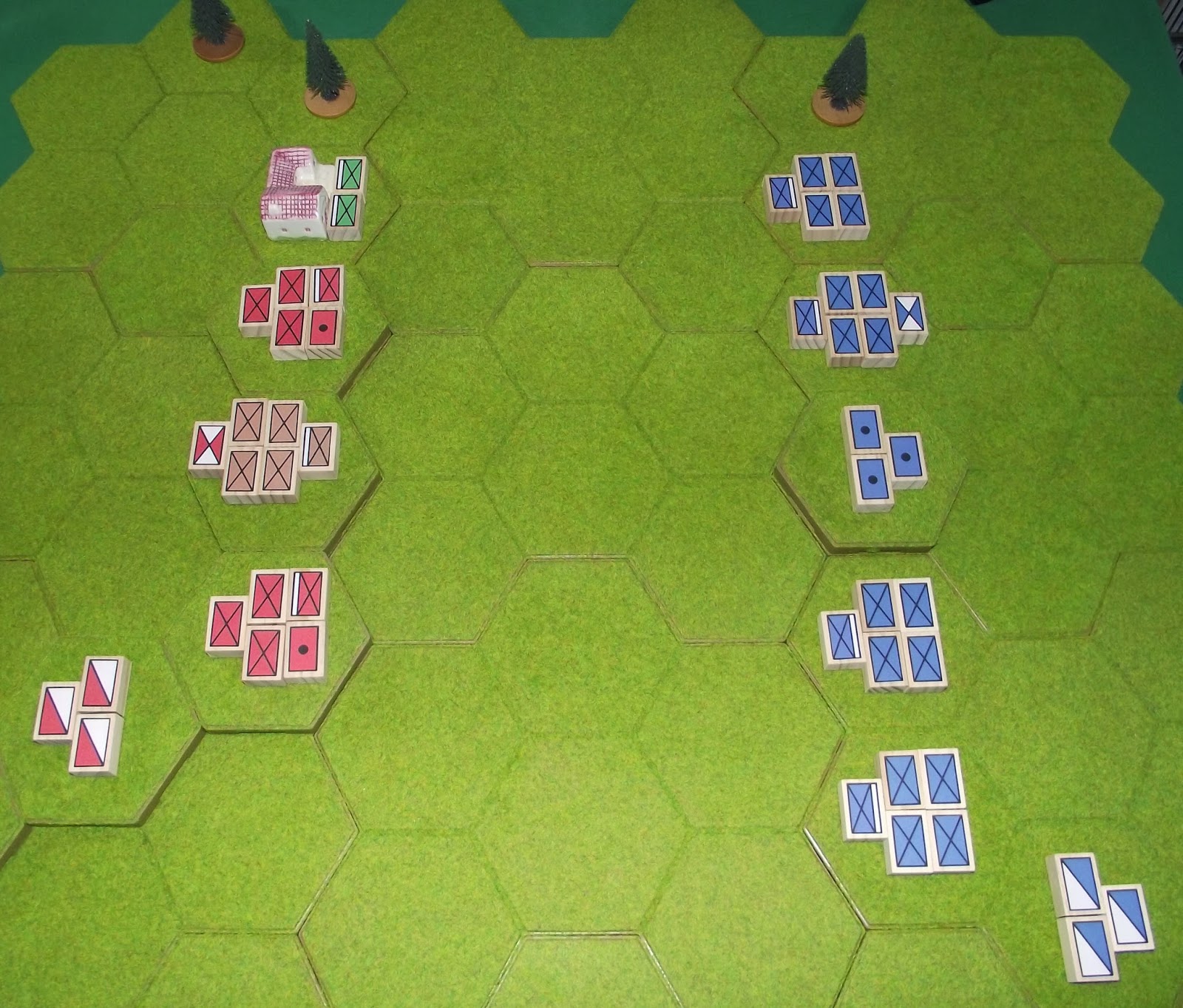 A Peninsula diversion. The action was fought on a 9 x 8 hexed playing area with the sides equating to roughly a division apiece. The units represented brigades and you can clearly see the skirmishers deployed to the fore of each formation. The Allies have a battery of artillery in support of the two British brigades whilst the French have massed their artillery into a grand battery on the hill. The brown troops are the Portuguese and the two green blocks in the the small farm are the men of the 95th rifles.


I planned to have a test today of the various ideas I have been messing around with for a set of Grand Tactical 19th Century rules. Messing around with turned out to be an apt description of the game I tried for a number of reasons that I had not considered. I will not describe the action in detail but will summarise it after I have listed the points arising from the test.


The only cavalry combat was fairly straightforward - the British charged in with their usual gusto and were duly chased off. The French columns, no doubt with much 'Vive L'Empereuring' and other such Gallic joie de vivre rolled up to the thin red line and were driven off in the same old style - although not without some hairy moments - in fact one British brigade (the one with the cavalry next to it) was pushed back over the other side of the hill but managed to regain its position, aided in part by the neighbouring Portuguese. If I am honest the game felt like it should do for an action in the Peninsula so must be rated as a success although the combat sequencing needs a little more clarity. I will take away the results from today and see how the next version shapes up but I am thinking that I am on the right track.

One thing that this test did serve to prove though was that a couple of ideas I wanted to incorporate will not now be needed - at least not in their original form.

The size of playing area worked surprisingly well and will certainly feature as a regular fixture from here on in.

All in all then, it was not a bad way to spend a couple of hours on a Sunday afternoon
Posted by David Crook at 17:03

It is early days yet but the signs are promising. The biggest difficulty will be in making sure that it does not become too complicated!

I must admit that this is looking very interesting ... especially in the light of my recent 'reorganisation' of my Napoleonic armies.

Early days yet but I think the core idea is basically a sound one. I shall persevere and see what comes out the other side!

It is possible that one can run into a problem in the column vs line combats. The problem is that history more or less tells us that columnar attacks are a losing proposition, as Napoleon himself remarked after Massena's 'muddle at Bassaco.' The column needs. of course, to be properly supported.

The problem with making columnar attacks too much of a losing proposition is that players will stop attempting a losing tactic and look for other methods. Up to a point (though don't ask me 'what point?') those alternative methods might be fair enough. Heavier skirmish screens, say, and more thorough artillery preparation. I'd be very tempted at leasst to explore the implications of a musketry bonus or firing uphill (or a penalty for firing downhill).

The effect of this would be to make linear tactics fairly problematic on the flat or on a hill crest, but fairly reliable when protected from enemy artillery by intervening rising ground, and slightly downhill from enemy cresting the rise.

It is a conundrum for sure - and for the reasons you state. I need to think some more about this as I do not want column attacks to be ignored entirely. I think I may have a solution but I will need to check another couple of rule sets first.

I don't know what kind of movement system you are using but wouldn't a column be faster than advancing in ranks? And if so, there might be situations where the commander employs the inferior attacking column because they need to close with the enemy more than inflicting the greatest amount of damage?

They are very valid points and ones that I would certainly want to capture. I seem to be having something of a mental block with this so I am stepping away from the idea for a week or two to clear my head. The overall concept is a sound one but I have fallen into the trap of trying to fit a quart into a pint pot!