The Crimean War at Sea: The Naval Campaigns Against Russia 1854-56 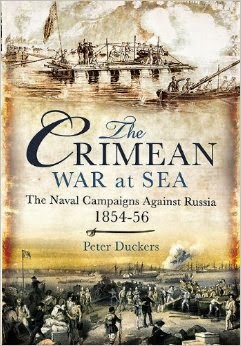 Things that make you go....'Ooooh Shiny!

This is the title of a really good by Peter Duckers and sure enough, it has given me much to think about! To my eternal shame and embarrassment my knowledge of the Crimean War is very limited with my knowledge of the naval side even more so. I had no idea of the scale of operations carried out in the Baltic and the Black Sea (not to mention the Sea of Azov) and although there was no Trafalgar-like fleet action (there could have been though) the scope of minor actions involving raids and shore bombardments - real combined arms stuff - certainly give plenty of ideas for scenarios.

I really want to find out more about the Turkish side of the conflict - especially as they managed to drive the Russians out of Bulgaria - as the British and French were originally planning on deploying troops in the Balkans in support. Naturally their navies would be covering the seaward flank in the Black Sea. Of course after the Russians had been driven off (and after they had manage to all but destroy the Turkish navy at Sinope) the allied plan was to render Sevastopol unusable and the rest, as they say, is history.

Although very much a transitional period in naval warfare the writing was certainly on the wall for sailing warships - the value of steamers for inshore work had been noted and so paddle steamers and screw sloops etc came to the fore.

I have a couple of ideas of where I might be able to take this and if I am honest, the period has more potential for me than perhaps the history would indicate.

Especially as there are Turks involved....

David
I picked up an ego ok of this title a while back in Pen &Sword's deals. I agree with you!
Cheers
PF

There was also quite a range of actions carried out by Naval Landing parties, such as this stirling chap:

Great minds thinking alike then! Lots of potential methinks and something that would be relatively easy to cobble together for a game. My feeling is that a few models would suffice and in my case, use of the block armies for the land side - at least until my project plan decrees otherwise....;-)

Gosh! Now there is a damn fine chap to be sure.

Bang on in respect of the whole combined operations stuff - French infantry acting with British Royal Marines in the Baltic for example.

Lots of potential but do I need another period?

Nice write up. Will be adding this to my, "Wanted Books List". As an aside, your talking of ships and paddle steamers, and all your lovely paint work on the ships for the Jutland project is really making me consider getting into naval gaming...which is something I swore I'd never do.

Many thanks for your kind words - much appreciated.

The great thing about naval wargames is that you can tackle pretty much any period on a very modest budget (sounds a little odd bearing in mind the Jutland project....), you certainly do not need much, if anything, in the way of terrain and there are a vast amount of rules sets around.

I would urge you you give it a try - it is enormously enjoyable!