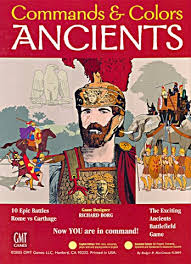 The set that launched a thousand expansions (well half a dozen really....)

I have dabbled in ancient war games since the early 1980s. I first cut my teeth using WRG 6th edition and had many interesting games using these rules. My first two armies were Carthaginian - one in 25mm and soon after one in 15mm. The 25mm version came from my old friend Chris Hardman and was a mixture of Minifigs, Garrison and probably a few Lamming figures thrown in for good measure. When I acquired it from him all I needed to do was to round up a couple of units and tackle some rebasing and in short order it was in action.

I quickly learned that the army fought best of all when the points values were low so fighting at 1,100 points (including the general) quickly became my preferred Modus Operandi. With the 25mm army (back when 28mm was in fact 25mm) the closest I ever came to fighting anything like contemporary opposition was against Chris Hardman's Seleucids - the 'Swiss army knife' army. As I recall I fought him twice - once at Rochford when we went for 3,000 points and I was comprehensively beaten and the second time at the club when I was able to grind out a draw. Actually we called it a draw as we had run out of time and I was grateful to be offered the same!

The army was great fun to use but it was difficult to win with - at least when yours truly was commanding it - as the troops it contained were fairly ordinary. It was difficult to get the momentum going with them as the troop types were so disparate that coordination was a challenge. Plus the fact I am no Hannibal....

I further dabbled with a Late Imperial Roman Army - that was great fun to use - and also a Classical Indian. I can still recall the Irregular B elephants with a general going impetuous and charging downhill into a Roman Legion - then throwing a maximum plus in the resultant melee!

I kind of fell out of love with the period (rather I was distracted by other things) until DBA came along and most of my figure games since then have been using these rules. I owned a 15mm Numidian Army  that was fun to use - a throwback to my Carthaginian days I suppose - but have never really pushed on with the period like I did in my early days. However, all of that can now change. 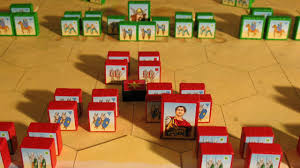 Romans (in red, naturally) and Barbarians prepare to get to get to grips - or should that be Agrippina? The picture is courtesy of Google Images.

Some time ago I acquired a copy of the Richard Borg designed Command and Colours: Ancients. This has been a successful series and covers warfare in the ancient world from the time of the Hoplites until the fall of Rome. the basic game covers the Punic Wars and the expansions cover the wars of Alexander and his Successors, the rise of Rome and the end of the Hellenistic era, the wars against the various Barbarians, the wars against the Persians from the Hoplites until Imperial Rome and the final stands of the Legions. In common with the other Command and Colours games the action is card driven and the units follow the usual 4, 3 and 2 block size standard.

Aside from the official scenarios contained in the rule books the game is really well supported with a whole world of internet based goodies - rules variants, army lists, scenarios and much else besides.

I have in addition to the base game a whole pile of blocks from the expansion sets so the collection is pretty complete. With the material I have to hand I should be able to fight pretty much any kind of ancient battle and whilst this will not be my main area of endeavour it certainly gives me something a little different to dabble in. I am not expecting to go down the figure route with this as the blocks are perfectly adequate.

Hopefully I may have better luck with the Carthaginians than I ever did using figures all those years ago!

It's a great game. I think it got milked a little bit after its initial massive success, but the base set and the first expansion are essentials if you like ancients and boardgames. Plays pretty well solo, too.

Enjoy! It's an excellent score :)

One of my all time favorites!

It's a game rather than a wargame simulation but it's easy to learn and fun to play
however mastering the tactics is not as easy as you may think initially, specially when and what cards to hold waiting the right moment to smash your opponent
I love the game and even I have recently bought the Napoleonic set

If I am honest I have not given this game the attention it deserves but I am looking to rectify this over the next few months. Having the first two sets is certainly key to the series and will suit my immediate needs. I mentioned that I would not go down the figure route but who knows?

I can see why it is so popular and am confident it will also feature in my top ten as well.

I am at the stage of my gaming career where I prefer the game rather than the simulation and as long as the 'feel' is right I am pretty easy going. I am thinking that this may well give my ancient interest a welcome shot in the arm.

I started with 'Battle Cry' (the ACW game forerunner of C&C). I now have all the C&CA expansions, plus the C&C Napoleonic sets and am looking forward to the forthcoming AWI version. My regular opponent and I have played most of the C&CA scenarios and I confess I have kept track of all the results. In time, we will playthroughthem all again, switching sides. We figure this will keep us busy for years, interspersed with a variety of figure games.
Oh, and Memoir44 is great WW2 fun, too. Anyone writing off thesegames as 'wargaming lite' has not played enough to appreciate the subtleties and the tactical challenges presented bythecard limitations.