The famous Minifigs logo. I remember buying their figures from a small shop in Charing Cross and then over at Victoria in the late 1970s and early 1980s. The whole range is now available from Caliver Books.

It has not arisen yet but I can foresee a fairly significant problem looming over the horizon in respect of the Eric Knowles 18th century lead mountain. The unpainted 25/28mm collection contains a significant number of figures produced by that stalwart of wargaming history - Miniature Figurines or Minifigs as we usually refer to them.

For me, from the mid 1970s until the early 1980s armies of Minifigs for all periods from the time of the Pharaohs until the Great War strode across the table tops of the wargaming world. Their catalogue was an inspiring read in its own right and I can remember the sheer thrill of having one drop through the letter box and be read until the pages came loose! In 25mm or 15mm when choosing a new army the first thought (after 'is there an Osprey or a Blandford on it?') was invariably 'do Minifigs do it?' For breadth of coverage and uniformity of quality and pose Minifigs had a huge impact on the wargames of the world. The figures were basic but would reward a good paint job as well as more basic brushwork and although wooden in terms of pose were ideal for using en masse. 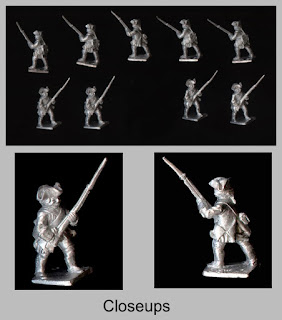 Now I am going to put this out there and certainly remain to be corrected but I believe that the reason we do not see quite so many Minifigs based armies around is simply because figure ranges now are not only larger but are also more detailed and animated. There is nothing wrong with this as there was nothing wrong with Minifigs - tastes have simply moved on and so it is very rare to see armies of Minifigs alongside Front Rank or Essex for example - simply because the ranges are so different.

I have absolutely no problem with Minifigs but I can see why they may not tick all the boxes for the evolved gamers of today.

Eric had no qualms about mixing ranges in his armies and indeed, was also usually fairly relaxed about such considerations as scale. This means that for most of his armies there is invariably a number of units of Minifigs - usually the first he raised for a particular project.

The problem that I think will arise is that whilst the Front Rank, Essex, Redoubt and later Hinchliffe will find a new home readily enough the early indications are that the perfectly usable Minifigs may well be left behind. This is a conversation that Bill and I will be revisiting in due course but in the meantime I will seeking out those gamers that enjoy using these classic figures.

I think they may have their own market. After all Caliver still manages to sell Minifigs at modern prices.

I thing the Mini Fig ranges have stood the test of time although not to every bodies taste I will admit .

I think you may be correct? There must be some old Minifigs stalwarts out there though, who will bite your hand off???
It's just a matter of finding them.

Thanks for this post, David, I did not know that Caliver had the old Minifigs lines. Sadly, the ones I looked at have not aged well, though as a nerdy kid in the 70s, I loved the big Minifigs catalogues and still have some in my collections.
Best,
Mike

I can confirm posted comments here that there are still Minifig devotees out there, I am one of them! 2nd Generation Minifig Napoleonics (not overly priced and a good paint job or preferably not painted) sell "like hot cakes" on
e-bay. As pointed out Caliver books still produce and sell Minifigs. I gather yours are 25/28 mm, which I understand unlike the 15/18 mm ranges haven't changed much. If you don't get much joy in the U.K. try e-bay international, you may be pleasently surprised. Kind Regards, Ian (Australia)

I am sure that they are still popular in certain quarters but I wonder if that is primarily from the 15mm side? All of my immediate gaming circle have moved away from the 25mm ranges as stylistically they just do not work as well with more ‘modern’ styles of sculpting.

Personally I love them but can see why some gamers prefer other ranges,

I agree with you and would have no problem raising armies using them.


Firstly, I hope you are well and on the mend.

I like Minifigs and would use them but they look quite dated compared to more modern figure ranges. They look plain odd and old fashioned against such things as Front Rank but let us not lose sight of the massive impact they have had on wargaming as a whole. As you rightly say there are stalwats out there - it is just a case of finding them!

I also remember with fondness those big old catalogues - and the thrill as one dropped through your post box! I have not seen how the figures look today and suspect that you are right given that he moulds are probably quite mature. Most of the Minifigs that Eric has would have been acquired during their heyday - mid to late 1970s - so despite being old are quite crisp.

Ebay will undoubtedly feature at some point but to begin with I want to see how far I can get on a collection/delivery basis. Shipping overseas I will be expensive given the amount of figures we are talking about but may still be attractive to devotees.

We will have to see how it plays out.

Good post David, I came full circle re Mini Figs after seeing them as a poor man's wargames figures for many years. Now, well I was lucky enough to buy a lot of ECW Mini Fig castings very cheaply a couple of weeks ago and am mixing them with my Hinchliffe ECW for my latest project. They are just different to paint than the Hinchliffe which to be honest isnt a problem, I just line them more. Ive yet to tackle some of their notorious horses but the actual cavalrymen are lovely sculpts.

Huzzah! I would quite cheerfully use Minifigs for all my gaming needs so it is good to see someone else keeping the faith! There is an awful lot of Minifigs in this collection - mind you there is even more Front Rank etc!

I remember seeing a full page advert for the Minifigs AWI range in one of the magazines years ago and being gobsmacked by the extent of their coverage.

Two very good gaming chums of mine used to produce some quite stunning paint jobs using Minifigs 25mms and so it is certainly possible to do as you suggested to fit them in. If I am honest I am not convinced that the painting is the problem - more likely the very different style of Minifigs not fitting in with contemporary models as well.

I used to like the ECW range although I have never gained the period.

DC.. I think the guys have it really.. there's nothing wrong with the range.. far from it... it's just the style is no longer fashionable... I still buy and use their 15mm Marlburian infantry as the sculpt is elegant to the point of beautiful, but even with a collection like the 25mm AWI one that I have, I can't see me buying any more... when I looked at figure ranges at the start of my ECW project I discounted the 25mm Minifigs (style aside, buying new they are quite expensive) and that despite some of my favourite memories being of going to the factory shop down in Northam Rd in Southampton.. magic!

In my opinion I reckon that Caliver Books may have missed a bit of a trick with their pricing of the Minifigs range as, to be honest, I think they are currently too dear. I appreciate that metal and labour costs are the same as for other manufacturers but then how does Spencer Smith produce their 30mm old school range as cheaply as they do? Probably not a good example as I believe that Peter is a one man band. If it costs as much for a Minifigs 25mm figures as it does for a Front Rank equivalent then I reckon most gamers would opt for the latter.

If I can get some mileage from the 18th century Minifigs in Erics collection in terms of suffient to build armies then I would certainly look to do so. That way buying the odd full priced figure from Caliver would not seem so daunting.

All the best and many thanks for flying the Minifigs flag!

I have Late Achaemenid, Alexandrian Macedonian and Classical Indian armies of MiniFigs. Warrior Miniature Severan Roman and Irregular Miniatures Sassanid armies all in 25mm. They all look reasonable on the tabletop whether they win or lose. Regimental on a Napoleonic scale maybe. But they still look the business.

When used en masse armies of Minifigs look really good especially when deployed in regiments. Back in the day I had a Carthaginian army that was primarily Minifigs and it looked great.

I started the hobby in the seventies.Figures bought were 25mm Minifigs and Hinchliffe. Only ECW were 15mm. Drop out of the hobby in the 90s and returned ten years after law school so I missed the scale creep in 28mm.

Being in south america we bought from USA stores. We are now painting the 25mm lead mountain bought 30-50 years ago. We have taken the decision to avoid 28mm and use large batallions. No way we'll switch to 28mm

I have always enjoyed pure 25mm as a scale and would only use 28mm for small scale skirmish style games to be honest. I am sure we all have a lead/plastic mountain - perhaps not of a 30 to 50 year vintage though!