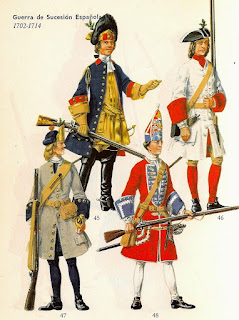 A rather nice colour plate from, as I recall, a Blandford uniforms title.

I went through the remaining five crates of figures from the collection of Eric Knowles and true to form there were a few surprises revealed and even more unanswered questions!

I can now confirm what was in the crates and this weekend will see the laborious task of listing out the individual boxes. To give you an idea of what I am dealing with the following is a rough guide to what is present.

There are also a number of generic boxes of figures for the 17th/18th century - villagers, armed mobs, militia types not to mention some Napoleonic naval gun crews.

Virtually all of the units are individually boxed although in a couple of cases time has not been kind either to the boxes used nor the identifying labels. The forces as a rule contain all the associated command figures in the units and for the most part the infantry is regimental in size e.g. regiment x has y battalions. There is cavalry, gunners, engineers and command for each of the main armies. In a few cases the units are referenced back to the plate and page number from the Funcken Lace Wars series.

I suspected that I did not have all the 17th/18th century unpainted figures and a quick telephone call with Bill confirmed this. The simple reason is that he ran out of crates! The plan is for Bill to sort out the remainder to pass to me in due course but in the meantime the cataloguing can commence.

In terms of numbers of figures Eric's armies were very much a product of their time and so larger units that could be broken down into smaller parts was the order of the day.

Staggering numbers,so many possibilities that didn’t happen,makes me a little sad for Eric that he never got to use them.
Alan

I suspect that there are good few of us that have 'stuff' that we have yet to use but this lot is (I think) quite exceptional! I would have loved to have found out what the plan was for the Electorate of Bustenberg but sadly this was known only to Eric. I am planning to write a blog post about it over the weekend.

Trust me, the profanity levels were off the scale when we lugged that lot up into the loft!

It is a truly magnificent lead mountain alongside of which we mere mortals are as but worms....