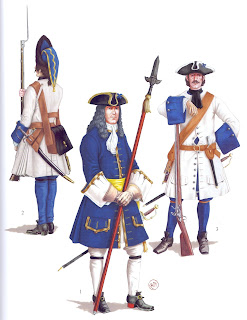 I am a huge believer in synchronicity - of multiple moving parts, seemingly unconnected but coming together in space and time to a particular end. Some may say that this is all coincidental and that there is no great plan in the overall scheme of things; or that one can be shaping the conclusion to suit the facts. I cannot comment on either of those two views but for me synchronicity has always had an air of inevitability attached to it. So it has been for me over recent weeks and in fact, going back over many years and including two visits to Corfu, two visits to Venice, two visits to Cyprus, two visits to Malta, three to Turkey and one to Crete. Probably even further back when you include being introduced to 18th century wargames in the first place at the former Newham Wargames club in the late 1970s as well the delights of the army and military history of the Sublime Porte, courtesy of Eric Knowles.

All of that history, of reading and visiting places touched by the great events of the past and thinking, always thinking about how they would game. Planning armies and discarding one design after another but still taking part in the occasional period specific game, just to stoke the embers of an idea, of a grand scheme.

I have always been attracted to wars or parts of wars that are not in the mainstream and so when anybody says Marlburian then straightaway thoughts of British, Dutch and French armies automatically spring to mind. For me it is the same thing with the Seven Years War - Britain, Prussia France and Austria first with everything else following up. I prefer the wars on the periphery - not necessarily smaller than the main theatres but, well, different. The armies are usually off balanced for one thing - meaning varying quantities of troop types as well as differing tactical considerations. For me this makes for a better game as both sides have different tools to use. 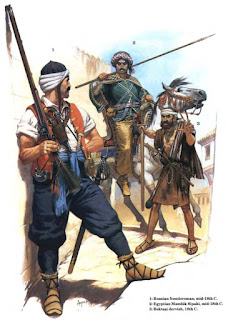 18th century Ottoman troops. Slightly later than what I am looking at but with little difference in attire.

I have always hankered after an Ottoman Turkish army - probably going back to when I was battered mercilessly by one trying to defend Vienna against hordes of Janissaries and a siege train I still have nightmares about. It always seemed to have that exotic 'wow' factor and I suppose it appealed to the inveterate tinkerer in me. There is such a diverse array of troop types and the army seemed geared up to be able to deal with any kind of opposition thrown at it. In many ways it reminded me of my Carthaginian army which was also a similar 'Swiss army knife' kind of set up although not quite as effective and certainly smaller!

I now have an Ottoman Turkish army suitable for the later 17th and 18th century. I politely declined the offer of Eric's painted version simply because armies of that scale (we are talking about thousands of figures) are no longer part of my gaming universe. I would never be able to use all of it and storing it would be beyond my resources. I toyed with taking a representative selection of figures from the collection - my standard 150 figures an army - but decided against this as the collection should remain intact for those that have more space, time and money than I.

The unpainted version is not as large but still tops out at over a thousand figures and includes Dixon, Essex, Foundry, Hinchliffe and Minifigs. The weakest portion is the cavalry as this virtually all Minifigs and so does not sit well alongside the infantry at all. It is no matter as I shall acquire what I need from elsewhere. I have selected the figures I shall be using and will make the final 'cut' once I have checked out a few sources.

What of the opposition? What do you plan to do with this lot? Well, and here comes the kind of synchronicity part, I have been looking long and hard at Eric's collection of unpainted models and have tried to work out what his plan was. I have no idea but it has crystallised a long dormant idea that resurfaced last year upon my return from Corfu.

The latter half of the 17th century and the early part of the 18th saw the Republic of Venice fight the Turks on a number of occasions. Ultimately the Turks were able to secure most of Southern Greece from the Venetians and indeed, it could have been a lot worse had the Austrians not come to the aid of Venice in 1716. The final war of 1714 to 1718 - the Second Morean War - ended with Venice becoming in effect an Austrian vassal  and the Turks ceding territory to Austria. The Turks kept much of the former Venetian Greek territory.

Eric had raised units for Venice for the period as well as a number of other Italian units as the armies of the Doges relied on the use of mercenaries alongside their militia and small number of regular units. The Turks had their usual core of Janissaries and Sipahis supported by locally raised volunteers and levies. The Austrians was a small regular army supported by the border forces of Croatia and similar.

It would be tempting to equate Eric's Venetians and Austrians with his imagi-nations of Umbriago and Bustenberg respectively but I have no certainty of this. 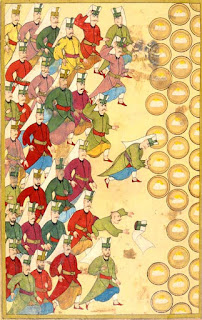 Janissaries accepting the Sultan's food - always a good sign as it meant that they were happy with their lot! Note the variety of dress except for the famous head gear.

My plan then, is to raise in addition to the Turks, three other representative forces for the period - Venice, Austria and Russia. These will be of a similar size to the Turks so 150 figures will be the order of the day. Taking some 600 figures from Eric's unpainted lead mountain will barely scratch the surface and in fact represents probably less than half a crate of figures.

If I am honest this idea may well have never seen the light of day were it not for the fact I am sorting through Eric's lead mountain and to be frank, it was simply too good an opportunity to pass up on as pretty well everything I need is right there.

I had never planned this, nor was the prospect of painting new style 28mm figures for the 18th century something I would have looked out for but, and this is the important part, many of the figures - particularly the Turks - lend themselves nicely to the old flat colours and dip approach which even I, with my well known pathological aversion to painting anything organic, can manage.

Of necessity I will need to invest in some material to support this project but surprisingly not to any great extent. I currently reckon around half a dozen books, a selection of bases and a number of cannon. For rules I have not really given much thought beyond The Pikemans Lament although I may take a look at Donnybrook. The Portable Wargame would work well or I may even take a look at something specifically Marlburian - perhaps even Maurice, about which I have heard many good things although the number of figures I will be using may be too little. 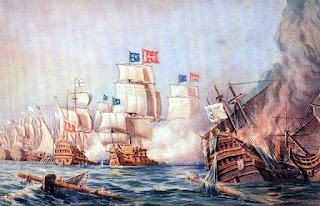 Let us not forget the naval dimension as well as Venice and Turkey fought a number of clashes in the Aegean sea.

There will be a lot to do with this and for sure it will be a slow burner but it certainly has the feeling of some kind of destiny about it. It has all the elements I enjoy from a gaming perspective as well as appealing to my sense of the exotic.

Carpe Diem for sure but with a long and convoluted ribbon of synchronicity wrapping it all up.

I know these are a particular favourite of yours and so based on that I may well be taking a look at them!

No approximately 600 ;)
Have fun .. that's what the hobby is about .. look forward to conversations at CoW wrt to the rules

Looking forward to seeing this all come together.
Alan

It sounds really daft but this is kind of what I wanted to get to when I was thinking about the same for circa 1870. It has been a long an circuitous road but I really feel in a good place with this project. Like I said though, were it not for the opportunity I have I doubt it would never have gotten beyond the planning stage.

Looking forward to COW although I have Cuba in the way first!

It is not going to an easy or quick project for me but I feel oddly confident about the outcome. Progress as usual will be via the blog but don't expect anything major in the short term!

This is just all kinds of awesome David!
Some of your long term aspirations all wrapped up in a bundle :-)

It is something I would never have contemplated under normal circumstances but seeing all the constituent parts in one place at the same time was the clincher. I will never know Eric’s grand scheme for this but I like to think that as his more usual Marlburian era troops - British, Dutch and French etc - already featured huge painted armies he wanted to round out the collection. For me, this theatre of the wars of the period is of far more interest than the more usual Belgium based version.

Right place, right time - with the personal journey leading up to it.

I simply could not ignore it!