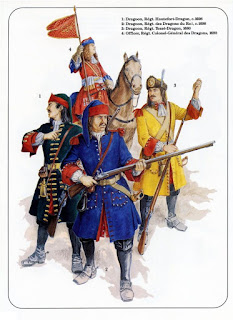 Some very colourful gentlemen from an Osprey title although I have no clue as to which one!

Following on from the previous couple of posts I have stepped back from the 11 crate (soon to be joined by a further 6) lead mountain and have had a think about the most effective way to catalogue the figures therein.

My first action was to sort the figures into nationalities which was a very useful exercise and gave me a better view of the scale of the project. However, judging by the emails and comments I have received I am thinking that I need to break this down a little further into some kind of chronological order as well. 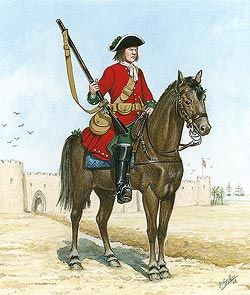 A mounted musketeer from the Tangier garrison.

Eric's collection ranged from around 1680 up to the American War of Independence and even the French Revolution so it makes sense to divide the forces into sub periods. With this in mind I shall be adopting the following:

I have chosen the above dates because some nationalities were a little slower to change uniforms etc than others and so a degree of overlap exists. I do not profess to be an expert on any other periods described but as an example the British army looked different during the wars of Marlborough than in the earlier iteration.

Eric, who knew the period far better than most, described the units using those dates so I shall use them as a guide.

Units will be listed by nationality but I shall order them into the correct time frame so that people that have no interest in a particular period need not look at lists that are not relevant to their chosen subject. Naturally the lists will be incomplete until I get the other 6 crates but at least it means I can make a start on them in the most effective fashion so that the new additions will merely need adding when available.

I hope to get this sorted out over the coming weekend.
Posted by David Crook at 08:51

David you are now either an archivist or a taxonomist

This sounds like a big job David. I assume you are looking to off load some of the units? If so I look forward with anticipation to what you wish to sell on.

In truth I reckon a little of each would be about right!

I am looking at hopefully offloading pretty much all of the unpainted figures. Email me what you are looking for and I will see what there is.

I am always looking to build upon my FIW period should you be looking to push some of that lead onwards.
Good luck with this awesome project!

There is a smattering of FIW material for the British but for the French there is a whole army described as ‘Colonial’. I will not know what is in this until the end of March but I do know there are six canoes!