Battlefleet and the 18th Century....

It was a good day yesterday as not only did the Winter 2018/2019 edition of Battlefleet - the journal of the Naval Wargames Society - arrive but I also took delivery of the first part of the Eric Knowles collection that I am helping his son, Bill, to dispose of. 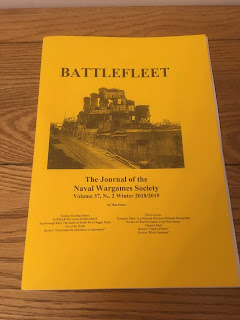 The last edition of the current subscription year and as ever, a very interesting read.

Battlefleet is currently on volume 37 and this is number 2. The contents are as follows:

4. Roman Warship Names (A Note) by Rob Morgan
6. SUBMARINE versus SUBMARINE by Rob Morgan
7. Scarborough Raid, the Battle of the South West Dogger Bank, December 16, 1914 by Ed Beauregard
23. SAGA at Sea by Simon Stokes
27. Out of the North: How to Build, Adapt and Paint a Viking Long Ship by Dickie Boyd
38. 'Rainbow Plans' in a National Maritime Museum Monograph by Rob Morgan
40. Jumpers for Goalposts - and Matchsticks for Torpedoes! by Mark Sharpe
40. The Channel Dash 11th to 13th February 1942 by Simon Stokes
51. Review of Warlord Games Cruel Seas Starter Set by David Manley
58. Review of "From Imperial Spendour to Internment" by Nicolas Wolz, translated by Geoffrey Brooks (published by Seaforth Publishing 2015) ISBN:978-1-84832-228-8 by Steve Millar
59. Review "Clash of Fleets" by Vincent P O'Hara and Leonard R Heinz (published by Naval Institute Press 2017) ISBN: 978-1-68247-008-4 by Steve Millar
60. Review "River Gunboats: An Illustrated Encyclopedia" by Roger Branfill-Cook (published by Seaforth) by Rob Morgan.

A nice selection of articles as ever and so this will be my train reading for the next couple of days! The Cruel Seas review by David Manley is very interesting and as he is well known and respected writer of naval rules is well worth a read. I also enjoyed Scarborough Raid article as well SAGA at Sea - something for the Dark Age skirmish fraternity to think about although 28mm Viking ships may be a challenge to source - take a look at the article Out of the North for some ideas in that direction! 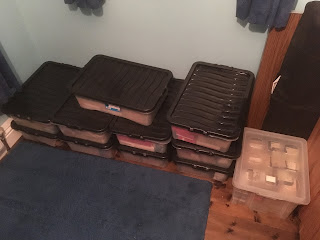 Something special this way comes! This is very much the tip of the tip of the iceberg and Bill estimates that he has at least another 20 boxes of unpainted stuff but the above is all the 17th/18th century.

I thought I was getting 10 boxes but instead in turned into 11! The above contains the 25/28mm unpainted late 17th and 18th century figures from the collection of Eric Knowles. I shall be spending the next few days sorting through this lot (and moving it into the man cave) and drawing up a list of what is there. Fortunately Eric was quite organised and so everything has been assigned to units with, in many cases, regimental details for painting etc. The one problem I will have though is that the figures themselves are unidentified - Minifigs however should be easy enough to spot! - and also that Eric would often use figures for units and nationalities other than that which they were intended for.

My plan is to first sort the unit boxes into nationalities and then list them with the number of figures making up the unit. I will be able to take photos as and when required. the unit boxes themselves are interesting in their own right as there are old Hinchliffe boxes, old style plastic kit boxes, 54mm Britains boxes all complete with the dust of 30 to 50 years of storage!

I will post on the blog as I progress through this lot and then comes the hard part of selling the same. There will be bargains to be had!

Battlefleet is always a good read although it tends to have articles by the same group of authors - something that I have often thought about adding to but have not gotten around to yet!

You also get the online jotnal - All Guns Blazing - which usually arrives on a monthly basis.

I would say that it is good value for money and certainly has plenty of inspiration therein.