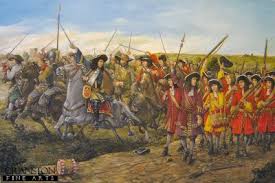 It has been an eventful week to say the least! To begin I finally took delivery of the first part of the lead mountain that Eric Knowles had acquired - 11 crates worth of 25/28mm figures - with a view to sorting out disposing of. After having ordered the figures into nationalities I soon discovered that this was by no means the finished article. Sure enough, a quick phone call to Eric's son Bill and it came to pass that there is probably another 5 or 6 crates of unpainted metal for the 18th century collection. The sole reason I only had 11 crates worth was simply due to Bill only having this number available!

Sorting the crates into nationalities took me a couple of nights and so I now have a much better handle on what is there. So far the main bulk is probably for the Seven Years War and in a way this makes a degree of sense as Eric's painted collection for the 18th century is primarily Marlburian. he was certainly looking to expand into the Seven Years War and so acquired most of the models from such sources as Front Rank and Hinchliffe by the looks of it. There is a lot of Minifigs in the collection but Eric was in the habit of routinely mixing figure manufacturers within his armies so he would not have fazed by this.

I will need to further break the collection down as there is a lot of residual 1680 to 1700 material for most nationalities - complete armies in some cases - so my first listings will be for this period and for the Marburians. The Seven Year war will be next, followed by the American War of Independence.

The piece de resistance from this earlier selection of figures is undoubtedly the Irish Army of King James for 1690. The figures for this are mostly Essex and Front Rank although again there are a couple of Minifigs units thrown in for good measure, even the odd Hinton Hunt/Les Higgins!

There is a large Ottoman Turkish force that includes everything from Janissaries through to Crimean Tartar horsemen with a large dose of miscellaneous foot and the inevitable Sipahis. Alongside of this there is also half a crate of figures for the Indian subcontinent so lots of native irregular foot and Sillidar cavalry.

There is also the enigmatic Electorate of Bustenberg.... 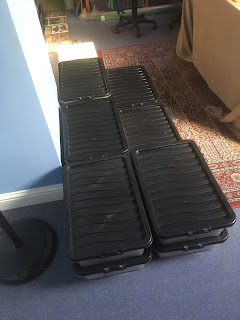 In their (hopefully) temporary new home - 11 crates of unpainted 25/28mm metal figures and yes, it was as heavy as it sounds! The bright white square at the top of the black crates is a different type to the others and contains the British. The glare is from the sun shining down on what became the empire....

My son and I managed to get this lot up into my man cave on Saturday which makes for the reestablishment of domestic harmony once again - SWMBO was quite tolerant of the 11 crates being downstairs - although as the week wore on the tension levels began to rise ever so slightly....

The other big news for the week is that Pen and Sword the publishers have accepted my book proposal and so now I am officially an aspiring author!

I am really excited about this and the plan is for publication at some point next year. I have already amassed a whole pile of notes and stuff and the basic framework is largely in place. I now need to crack on with the draft.

Great news that your book proposal has been accepted:)

Many thanks old chap! There are a number of moving parts to organise but a lot of the framework is in place.

All I now need to do is to flesh out the bones so to speak!

Hey Dave, Happy to hear that your book proposal has been accepted. Pen and Sword publish a lot of interesting books, so it is quite an accomplishment to land a book with them.
Chuck

Many thanks old chap! I am very pleased to have been given this opportunity but now the real work begins. I have some very exciting ideas in the mix for the book so I hope it will contain something for most people!

Well done on the book front

Many thanks old chap! The real work begins now!