The Collection of Eric Knowles....Part 5 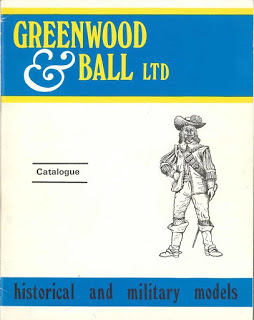 A Greenwood and Ball catalogue from circa. 1975 - not in the 11 boxes but a fair number of Seven Years War figures certainly are!

I have just gone through the first six of the eleven boxes of figures and to say that I was stunned by the contents is probably something of an understatement! My plan is to sort out the boxes of units into nationalities and to then draw up lists to be passed on to interested parties. So far so good but there were certainly a few surprises uncovered.

The sorting process has been helped enormously by the fact that Eric labelled everything and also dated the units so there are some from 1680 to 1700, 1720 to 1740 and then 1740 to 1780. He also added small notes as references in many of the boxes and so, for example, quite a few units quote the appropriate page and unit from the Funcken Lace Wars series. There are British, French, Austrian, Venetian, Bavarian, Ottoman Turkish, Polish, Prussian and a solitary box of Russian cavalry. By far and away the largest component across the collection is for the Seven Years War and I am fully expecting there to be a lot more of this in the other five boxes.

There is a lot of Greenwood and Ball figures in the collection as well as Front Rank and Minifigs and whilst I am fairly comfortable identifying the latter will certainly struggle with the former. The unit sizes are variable but significantly Eric seemed to have raised regiments of multiple battalions. It struck me that this collection seemed to be moving towards the Seven Years War more than the earlier Marlburian/late 17th century which formed the bulk of his painted armies. When I think back to the Newham days both Chris Hardman and Neil Fox were very active in the Seven Years War whilst Eric for the most part fielded his earlier collection but was starting to raise later armies. This may go some way to explaining why the earlier period unpainted figures are by far the smaller part of the lead mountain. Having said that there is still an awful lot of figures!

One thing that did surprise me (well surprised me more than anything else!) was a selection of unit boxes complete with names and composition for what  was destined to become an 18th century ‘imagi-nation’ army. This army goes under the name of the Electorate of Bustenberg. I never knew nor heard about this back in the day but it is fascinating to speculate what Eric’s plans were for this force. One thing that did tickle me - and members of the Madasahatta alumni will appreciate this - was that one of the infantry regiments went by the name of Von Boozey.... 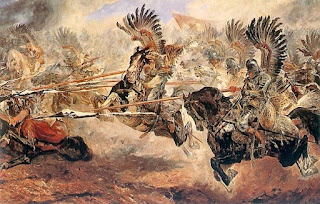 Polish Winged Hussars doing that 'thunderous and unstoppable charge' thing they do SO well....

Another surprise was opening several boxes of 17th century Polish cavalry include a quite superb unit of the famous Winged Hussars. You may recall mention of the refight  of the great Siege of Vienna in 1683 that took place in the cellar of Eric’s shop. The armies in this refight came from a variety of sources but the Poles were loaned from one of the denizens of the Newham club. I can only assume that Eric then decided to raise a Polish army to add to his forces for the late 17th century.

In the absence of any hard facts on the subject I have come to a number of conclusions about the collection and where it sits in the grand scheme of things. That Eric was looking to raise some large Seven Years War armies there can be no doubt. He diligently acquired all the figures, organised all the units and had worked out what units were to be represented. The figures used were for the most part 25/28mm from a variety of manufacturers and in many ways represented a step up from his earlier, largely Higgins based Marburians. Eric would happily mix ranges in his armies and would routinely use Higgins with larger figures but the latter were becoming more and more readily available (remember we are talking about the late 1970s and early 1980s) and so formed a far greater proportion of his planned forces. I have no way of knowing for sure but when Eric retired and moved to Coningsby the 18th century kit seemed to have gone into storage at his bungalow and there it languished whilst he looked to WW2 (and grew a truly enormous collection in 20mm - still to be sorted). Hypothetical I know but it certainly fits the collection.

We will never know the whys and wherefores of Eric's plans with this lot but what is true is that we are left with a quite remarkable example of how to organise a lead mountain!
Posted by David Crook at 08:15

Fascinating to read these posts,thanks for giving us continuing insights into the man and his plans.
Alan

Many thanks old chap - much appreciated. So far there is no clue from anyone (including Eric's son) about the Electorate of Bustenberg which now fills a complete crate!

I am writing the next part of this post which has also produced a few surprise - and has raised even more questions!

I worry that Eric sounds a bit like myself. As one gets older I do wonder what I should do about my collections and more worryingly what I should do to help my next of kin understand what is worth something and what should be given to other wargamers. Its a quandary more so given that I am still buying lots. Best of luck with your endevours.

Eric's son Bill used to joke about the size of father's collection whilst he was still alive and certainly it would be a full time job to catalogue and dispose of all of it. By far the biggest problem though is finding space for all of it. Currently Bill is using a loft, a double garage and half a horsebox - not to mention what I now have to sort through.

My own collection is tiny but I recently made provision for parts of its disposal in my will. In all seriousness this is a very sensible thing to do especially if one's collection has a significant monetary value.