Return to the North West Frontier via Corfu 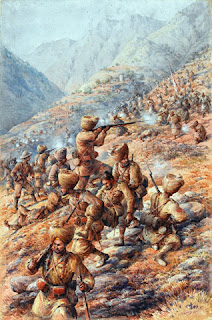 You may recall that before we went away I listed the books that I was going to read and also that I was hoping to spend some time visiting some places I had not gotten to during my previous trip.

I am happy to report that I was able to tackle a sizeable chunk of what I planned to do - meaning we will need to revisit the island at some point in the future to see those things we missed out on this time!

Our visit to the old fortress in Corfu town and the wander around the town itself will form a further post but for now I want to confine myself to the wargaming side.

After having very carefully weighed up the two Colonial projects I was considering - the French Foreign Legion and the North West Frontier - by revisiting Our Friends beneath the Sands and The Story of the Malakand Field Force I have settled on the North West Frontier for my solo The Men Who Would Be Kings and Portable Wargames fix. It was however, a very close thing.

I believe there is a lot more mileage from the NW frontier in terms of game value than with our friends of the legion (there is absolutely no disrespect intended!)  - and this is a very important consideration for my solo gaming. There is a wealth of material available for the period (I am focussing on 1897 initially) in terms of books and figures and also a much larger political dimension to be considered. There is also the Russians.

I intend upgrading my Roghan Valley setting based on my  research into the background of war of on the frontier to incorporate a whole raft of additional features to add the all important flavour.

As to figures I am as yet undecided but, given that this will be a largely solo effort, I am looking very closely at 20mm - as this would tie in with my WW2 ideas.

At the risk of sounding slightly north of bonkers it would not be beyond the realms of possibility for me to raise, in 28mm, a force for the Legion for use amongst my gaming circle. The number of figures required would not be large and there is sufficient suitable opposition from the collections of my gaming fraternity by for me own use the NW Frontier will hold sway.

More to follow in due course.
Posted by David Crook at 08:55

It sounds like you have some interesting plans, and I look forward to seeing how they develop.

That holiday has got the creative juices flowing!

For sure the NW Frontier will be the larger of the two projects and as such will be a longish term affair - I am currently back painting ships again - so ironically I will probably tackle the Legion first! For the Men Who Would be Kings I only need around 40 figures or so for the Legion whereas current estimates are around 200 for the Frontier as I will be tackling both sides.

In the meantime though I can start on fleshing out the background to the Roghan Valley.

I certainly hope it will be!