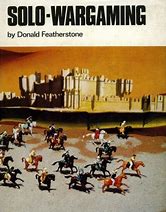 From the pen of late Donald Featherstone.... 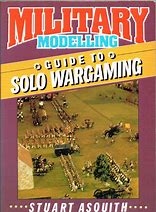 This is a new one on me but may be useful. At present I do not own any of these but I will look to acquire one or two titles in due course.
﻿

I must confess to being a little uneasy using the term 'solo wargamer' as I do not believe I am! It is true that most of my wargames these days are fought solo but I am equally happy to lock horns with a live opponent on occasion. I prefer to think of myself as a wargamer that fights battles solo on occasion!

I fight wargames solo simply for the sake of convenience as my gaming time is generally restricted to the weekend, with the occasional foray to the club, work permitting.

Most of my games tend to be played using whatever rules I am using with little or no special adaptations for the solo player. I can be very objective and impartial when fighting a game so the bias element has never really been an issue for me, at least not consciously!

I like to think I have a fertile imagination and so designing one off scenarios for my own enjoyment is a hugely rewarding experience and so taking the next step and linking some together in a campaign setting is an obvious one.

For me the big advantage of gaming solo is the self indulgence aspect. One can literally do anything - from stringing together a few linked scenarios to designing and populating an entire campaign in a historical or imaginary setting. My block armies were manufactured primarily for solo use in this context although I have used them against a live opponent once....

Thinking about my solo gaming and my rather relaxed attitude to the same has given me something to mull over. I want to enhance my solo gaming experience in a slightly more formal way and so I will be looking to acquire a couple of books on the subject - and there are a few around.

I have a number of ideas for long term solo projects and so I want to have an organised head when planning them. Tapping in to the collective experience of others will serve to help with this.
Posted by David Crook at 08:48

Solo games have their own charms, but nothing can quite make up for the camaraderie of playing an opponent across a table.

You are quite right but as my circumstances are such that I tend to fight more games solo it makes sense for me to be properly prepared and set up for it. Actually I like to think the same applies to face to face gaming!

All the best and enjoy Broadside.

I thoroughly enjoy solo wargaming, and a big part of the enjoyment comes not only from the game itself but from the photographing and writing up of it.

I'm very much in the same boat as you David, in that once a month or so I'll get a game with an opponent, but other games need to be fought solo. I like to play narrative campaigns solo, so that battles link with each other. By and large I trust in not having too much bias one way or the other, but there are some great little mechanisms and scenarios in the Stuart Asquith book that I've used a few times.
Happy gaming.

David,
John Curry has reprinted Don's Solo Wargaming in the History of Wargaming Project.
It is not, IMHO, one of Don's better books - possibly because he had a group of regular opponents.
Regards,
Arthur

Absolutely! I have gotten a little lazy of late in both writing and photographing but hope to be reenergised when I get back from my holiday.

I will keep an eye out for the Asquith title so thanks for the tip. Recently I have struggled to get even one game of any sort in a month but I am hoping to change that upon my return.

Many thanks for the tip. I have found Don's books to be a little uneven in terms of quality but as they say, quantity has a quality all of its own!

David, if you haven’t looked at this - you are missing out.

I've always been a solo gamer (45 years or more) although I do occasionally play against a friend and enjoy being able to set up a game and savour it over a week or so at my own pace rather than rush through it in an hour or so.

I've taken to wargaming solo for the most part because my interests don't coincide with those of most gamers. And I don't drive, so carting kit around is problematic. Like-minded chappies are thin on the ground (fortunately Jacko is one, when he can find an evening or a weekend day). Very occasionally I'll get to play a Napoleonic action with Mark the Chasseur...

But I like solo gaming as that is where I can indulge my predilection for imaginary lands, nations, heroes ... and histories.

I have never found a set of solo rules that I've felt satisfied with. I often have looked for Solo zombie rules. They seem to not do what i want or have to many tables.

Many thanks for the link - it summed up exactly how I have been thinking about things!

I am really enjoying the shared appreciation of the solo wargame and many thanks for the link!

If I am honest I am probably in much the same boat as you - the number of games I have fought solo way outnumbers those involving 'live' opponents.

You have hit several nails on the head! Your comment has given me food for thought for a blog post so watch this space!

All the best and thanks!

That is a dilemma for sure. For me I usually stick with 'normal' rules and just use my imagination (which has been described as.....interesting...).